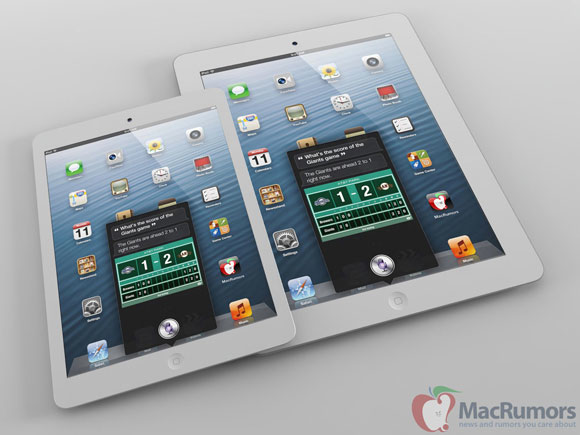 In the early hours of Wednesday morning (Aust time) Apple will hold a launch event in San Jose, California which is likely to see the introduction of the iPad Mini.

The device has been the subject of intense rumours for months and have intensified since the iPhone 5 launch has come and gone.

The 7-inch tablet market has been a popular one if the success of the Kindle Fire and the Google Nexus is anything to go by.

Samsung also has a number of tablets in the 7-inch and 8-inch category.

So why would Apple decide to enter this space after the late company Steve Jobs was an early opponent to smaller form-factor? He cited the original iPad’s 9.7-inch screen as the ideal size for a tablet.

Early last year, Apple Senior Vice President Eddy Cue was reported to be in support of a 7-inch tablet.

This was revealed during iOS software chief Scott Forstall’s testimony on US patent case between Apple and Samsung, according to Wired’s Christina Boddington.

CNBC later reported Steve Jobs was eventually convinced that it would be a good idea and was said to be “receptive to the idea” months before his death.

So what can we expect from the iPad Mini and what features will it have on board?

The other smaller tablets on the market have 7-inch screens but the rumours are strongly suggesting a slightly larger 7.85-inch display for the iPad Mini.

The main reason behind this size is so that the apps designed for the larger 9.7-inch iPad will still scale into this smaller size.

Apps would still run without the need for modification and without any of the elements of the app falling below what Apple calls the minimum tappable size. Certain.

The consensus online is that the iPad Mini will have a 1024 x 768 screen resolution.

And while that resolution is not Retina Display territory it will be the same resolution as the iPad 2. Likely

The iPad Mini will have more in common with the iPad 2 than the new iPad which was introduced in March this year.

Part of that is the A5 processor which was first seen on the iPad 2.

Apple is not likely to take the focus off the new iPad by packing the iPad Mini with the same high-end features like a faster processor and a Retina Display.

The new iPad will still be the jewel in the Apple tablet crown with iPad Mini offering users a cheaper and smaller alternative. Likely

As was seen with the latest iPod Touch and iPod Nano, Apple has added a touch of colour.

There have been murmurs that the iPad Mini may also feature these new colours with the same anodised aluminium rear panel.

This depends on whether Apple wants the device to have more in common with the iPod or the iPad.

The fact that the product is going to be called the iPad Mini (or something like it) not the iPod Maxi will mean there will probably not be colour choices. Unlikely

We first saw the Lightning dock connector with the iPhone 5 and it’s a safe bet to assume that every Apple mobile device from now on will feature this smaller dock connector – including the iPad Mini. Certain

There is even talk of an updated full size iPad being introduced with a Lightning connector. This smaller dock that replaces the traditional 30-pin dock connector and could even enable the new iPad to be reduced to the same thickness as the iPad 2 at 8.8mm – down from 9.4mm.

End of the line for the iPad 2?

Apart from the introduction of the new iPad Mini, the addition to the product line will possibly see the end of the iPad 2.

Apple is known for keeping fairly lean product lines and the iPad Mini may be seen by the company as the entry level tablet product and discontinue the iPad 2 with the new iPad still the hero tablet product. Possible

The smaller 7.85-inch screen of the iPad Mini is a better size for reading books.

Eddy Cue noted this fact after using the Samsung Galaxy. Cue also commented in a leaked email posted by CNET early last year, that email and Facebook was also “compelling” on the smaller screen with web browsing the weakest point but still usable.

With this in mind, Apple is likely to use this week’s event to create more awareness of its iBook Store which the company hopes can be eventually as popular as iTunes and the App Store. Likely

This week’s Apple event could also see the introduction of some updated products including a new 13-inch MacBook Pro with Retina Display and a re-designed iMac.