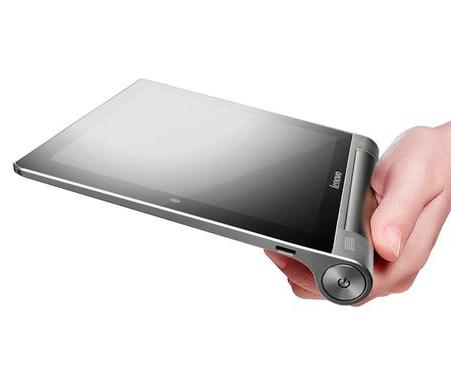 Lenovo, the company best known for its high-performance laptop has now shaken up the tablet market with the launch of the Yoga Tablet.

The device gets its name because, like a real yoga instructor, it knows how to bend and rest in different positions.

The Yoga Tablet was unveiled by actor Ashton Kutcher who is also a noted investor in the tech space.

“Watching and discovering that people frequently use tablets in three main ways allowed us to break the mould on the current ‘sea of sameness’ designs, giving them a better way to read, browse, watch and interact with content,” said Liu Jun, senior vice president and president, Lenovo Business Group, Lenovo.

“As consumers’ continue to demand innovative multimode designs we’re thrilled to have Ashton Kutcher on board with us to help further develop the immersive and complementary hardware and rich-content experience.”

Lenovo’s new device has three modes – hold, tilt and stand – which are made possible with a built in stand that can fold out and positioned to suit your chosen angle.

Available in an 8-inch and 10-inch model, the Yoga Tablet is running the Android 4.2 Jelly Bean operating system and is powered by a 1.2Ghz quad core ARM Cotrex A7 processor.

Also on board is a battery that Lenovo says will last for 18 hours. The larger battery is contained within the cylinder along the bottom edge of the device.

This shape and placement gives the Yoga Tablet a better way to grip and hold the device.

The Lenovo Bluetooth Keyboard Cover for Yoga Tablet will be priced at $99 when it available the first week of November.