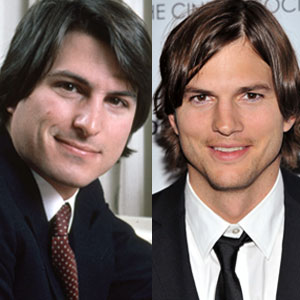 Ashton Kutcher will play Apple co-founder Steve Jobs in an independent biopic called Jobs, according to the Hollywood Reporter.

This production, due to start shooting in May, is separate to the project from Sony Pictures based on the authorised Steve Jobs biography by Walter Isaacson.

Ironically Kutcher is currently starring as tech billionaire on Two and Half Men – a character written into the top-rating sitcom following the departure of former lead actor Charlie Sheen from the show.

Kutcher also has several tech links in real life with a huge following in Twitter and involvement in a number of Silicon Valley start-ups.

Steve Jobs died on October 5, 2011 after battle with pancreatic cancer.

When the Kutcher/Jobs story broke in Hollywood, many were suspicious the news was an April Fool’s Day prank before Joshua Michael Stern (Swing Vote) was announced as director.

Coincidentally, Apple was founded by Jobs and Steve Wozniak on April Fool’s Day in 1976.

Stern will begin principal photography in May when the hiatus period between Two and Half Men seasons begins.

It is understood the film will document Steve Jobs rise from gifted student, hippie and eventual founder of Apple in 1976 and track his rise, fall and rise to take Apple to become one of the most valuable companies in the world.

Over at Sony Pictures which is still developing its own Steve Jobs project based on the hugely-popular Walter Isaacson’s biography with rumours the Academy-Award winning screenwriter of The Social Network Aaron Sorkin being wooed to write the script.