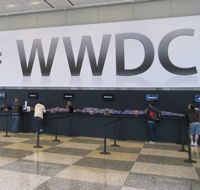 The main topics of discussion will be the Mac’s latest OS X Lion, iOS 5 which will power the iPhone and iPad  and the all-new iCloud streaming service.

Tech Guide has arrived in San Francisco to cover the event and will detail all the news and announcements that are rumoured to include news of a new iPhone.

New iPhones have been unveiled at the last three WWDC keynotes and there are hopes attendees will be given a glimpse of a new iPhone or iPhones.

Reports have been circulating that the iPhone 5 has been pushed back to September along with other whispers around an iPhone Nano – a smaller and cheaper device which can stream content over the network.

The new iCloud service, which is expected to include all the major music labels and movie and TV studios, has strengthened the likelihood a streaming-only iPhone device will be introduced.

OS X Lion operating system for the Mac has been completed and there are expectations the finished product will be available as early as next week.

The new features of iOS 5 – the follow up to the current iPhone and iPad operating system – will be detailed in the WWDC keynote.

One of these features is expected to be wireless updating and syncing of apps and content along with improved voice recognition and voice command features.

iCloud – announced in a release by Apple last week – will be a content streaming service which is understood to replicate a copy of your iTunes library online as well as accessing new content.

Reports indicate the service will be introduced for free before charging about $25 a year.

The Moscone Centre, the venue for WWDC in downtown San Francisco, is already decked out with huge posters of OS X Lion, iOS5 and iCloud.

All will be revealed tomorrow. Keep an eye on Tech Guide for a full round and also follow our live tweets from the keynote @TechGuideAU.

Go off the beaten track with Garmin Montana GPS