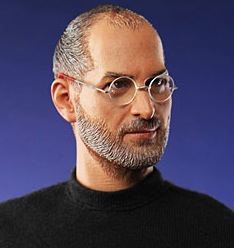 Remember the story we wrote recently about a creepy action figure of Steve Jobs being produced by a Chinese company Icons?

In a statement on the Icons website, the company said it was stopping sales “out of our heartfelt sensitivity to the feelings of the Jobs family”.

Icons insisted the 12-inch Steve Jobs action figure was inspired from admiration and believed it had not “overstepped any legal boundaries”.

But “immense pressure” from Apple’s legal team lead to the cancellation of the whole project, according to Icons.

Icons says it will offer a full refund to any customers who had pre-order the Steve Jobs action figure.

Here is the Icons statement in full:

“On 5th October 2011 Steve Jobs the genius, great inventor and visionary passed away. For the past 25 years I have been a big fan of Steve Jobs following his achievements religiously and using Apple products. His passing left me with emptiness, sadness and a feeling of great personal loss. (I am sure that these sentiments are felt by all of his fans) Four years ago I created a single figurine of Steve which I placed on my desk next to my Mac. I decided to share this memento with the rest of his fans as a commemoration to Steve. The figurine, especially his facial features, was adjusted countless times to achieve his likeness in my memory. I strove to perfect the figure with the spirit of Steve Jobs because only this will properly reflect my respect and admiration of him.

“I would like to take this opportunity to reiterate the original intention for creating the figure was driven by a fan’s admiration of Steve. We respect copyright and trade mark rights and therefore indicated on our site that we are not providing any Mac, iPhone and iPad models with the figurine. Further, we haven’t used any Apple related brands. Unfortunately we have received immense pressure from the lawyers of Apple and Steve Jobs’ family. Regardless of the pressure, I am still Steve’s fan, I fully respect Steve and his family and it is definitely not my wish or intention that they be upset. Though we still believe that we have not overstepped any legal boundaries, we have decided to completely stop the offer, production and sale of the Steve Jobs figurine out of our heartfelt sensitivity to the feelings of the Jobs family.

“Lastly, we wish to thank everyone for their admiration and appreciation of the figurine, and again, we offer our sincere apologies to affected fans.”