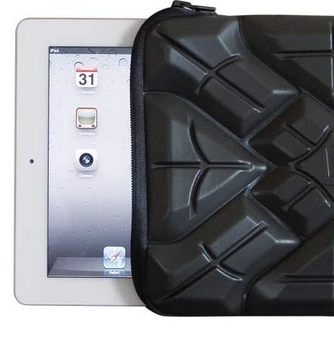 A few weeks ago Tech Guide brought you an amazing video of an iPad wrapped in a G-Form case that actually survived a fall from space.

Well, we caught up with the company at the Consumer Electronics Show and got a personal demo of the company’s astonishing shock absorbing material.

It wasn’t a drop from space but it was still impressive.  It involves a bowling ball and a packet of M&Ms. Watch the video filmed exclusively by Tech Guide.

G-Form is a US company which has created a material made from Poron XRD –  reactive material which changes its molecular structure on impact to absorb the energy and shock.

The company uses the material to make cases for laptops, tablets and smartphones and offers military-grade protection.

G-Form is also in the sports goods business and use the Poron XRD reactive material to make elbow, knee and shoulder pads.

When we met up with G-Form at CES we spoke with Thomas Cafaro, the company’s vice president of innovations and he explained that traditional shock absorbers use a foam-like material to cushion the impact.

As you can see in the video we shot on the G-Form stand at the Las Vegas Convention Centre, Cafaro – the star of all of G-Forms test videos – uses a pair rival foam pads and placed a packet of M&Ms between them before dropping a bowling ball on them.

The result was squashed packet of M&Ms which Cafaro showed us.

Next up was the same demonstration with a pair of G-Form elbow pads and a fresh packet of M&Ms.

Cafaro took the same bowling ball and dropped from the same height. The only difference was that instead of bouncing the ball just hit the G-Form pads and stopped dead.

And what about the M&Ms? Right before our eyes Cafaro took the packet out from between the G-Form and opened them up. There wasn’t  single squashed or broken M&M to be seen.

G-Form cases and sporting pads will go on sale in Australi in the coming months through a distributor called Pushie Enterprises.