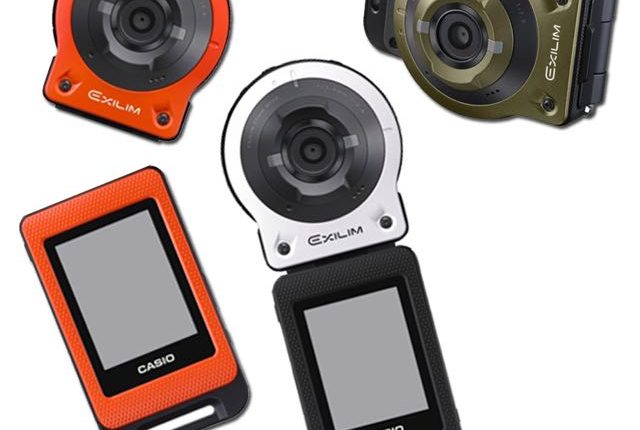 Casio has redesigned the camera with the new FR10 that has a detachable lens to offer a new dimension to your photography.

Revealed for the first time at the International Consumer Electronics Show in Las Vegas, Casio’s FR10 is a 14-megapixel camera that can be used in a number of ways.

Right out of the box you’ll see the device doesn’t look like a regular camera.

The lens sits above a 2-inch monitor screen but the lens can also twist back around to make it look like a normal camera.

But what really provides unlimited possibilities and freedom for the photographer is the fact you can detach the lens from the screen.

And even though they are apart, the lens and body are still connected wirelessly via Bluetooth.

Users can capture an image no matter what part of the separated camera they have – there is a capture button on top of the lens and the touchscreen can also snap a photograph.

In this mode the FR10’s lens can be strapped to your body to capture your bike ride, your paddle or your hike.

You can also attach the lens to an object and activate the shutter from a distance with the touchscreen for remote shots.

There’s also wi-fi on board the Casio FR10 so that when you’re ready to share your images they can be transferred from the camera wirelessly to a smartphone or tablet using the companion Link app.

Included with the FR10 is a carabiner strap, a neck strap so you can wear the FR10 lens section like a medallion and a tripod mount.

Due to go on sale in the coming months in Australia, the Casio FR10 will be available in three colours – dark green, red and white.

Australian pricing has yet to be determined.

Hexo + drone can fly itself and film your ultimate action selfies