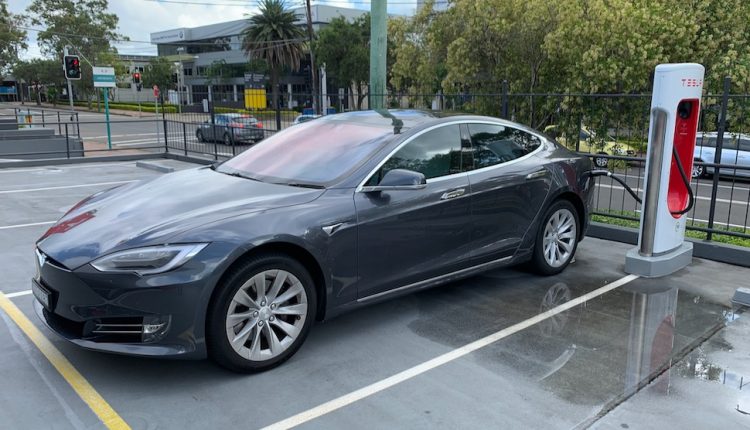 It’s been two years since I bought my Tesla Model S and the car is so much better today than when I bought it. You can’t say that about too many cars but, thanks to software updates, the Tesla just gets better with age.

I made a video about the top ten reasons we bought a Tesla back in 2018 – shortly after we bought the car – and I’m still very satisfied with that decision.

It’s been quite a journey driving the Tesla Model S for two years – so here is the good, the bad and the brilliant things about driving an electric car.

You need to be careful driving the Tesla Model S – especially in shopping centre car parks where people are walking around looking at their phones.

I’ve been behind people for up to 30 seconds before they realise I am there. You need to keep your eyes open.

I have not spent a single dollar running my car in the two years I’ve owned it.

I used a special referral code at the time purchase which got me free Supercharging for the life of the car.

I also have my own home charger that is powered by the sun through my solar panels. 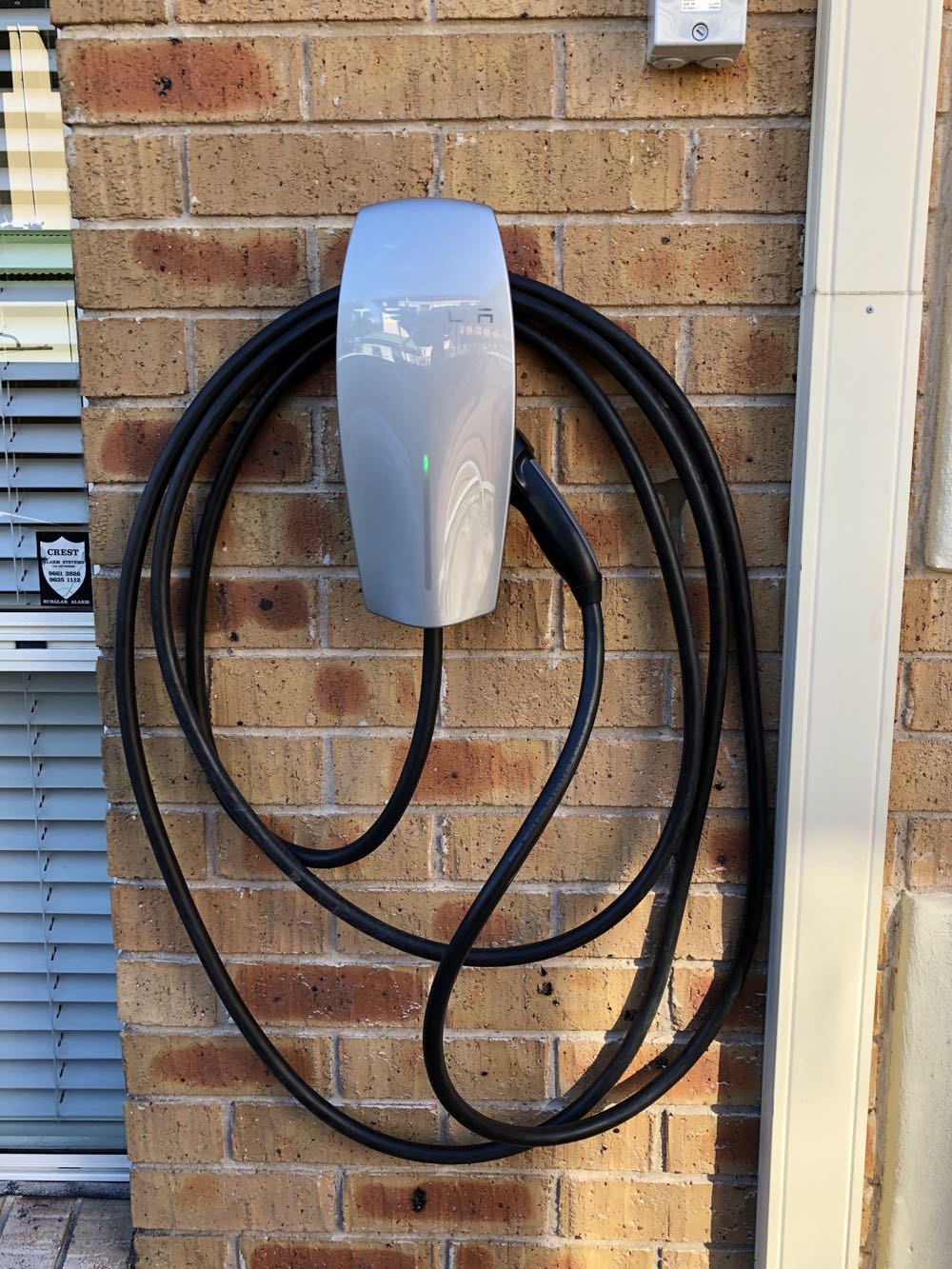 And I also make use of the numerous community chargers which are usually all free for EV drivers in car parks, shopping centres and hotels.

I drove a Mercedes Benz E-Class before I bought the Tesla and between fuel costs and servicing I spent about $3000 annually. So that’s a huge saving.

The only money I have spent on the Tesla was when I had a flat tyre after driving over a screw. 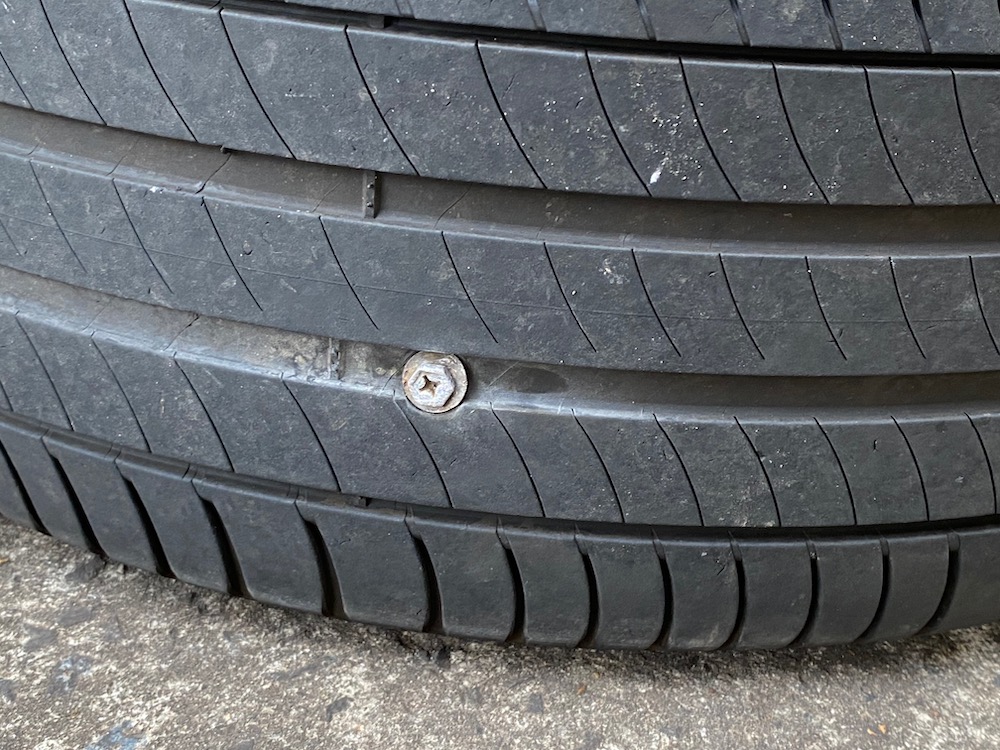 They then took my damaged tyre to a nearby Tesla service centre who told me it could be repaired for $70. 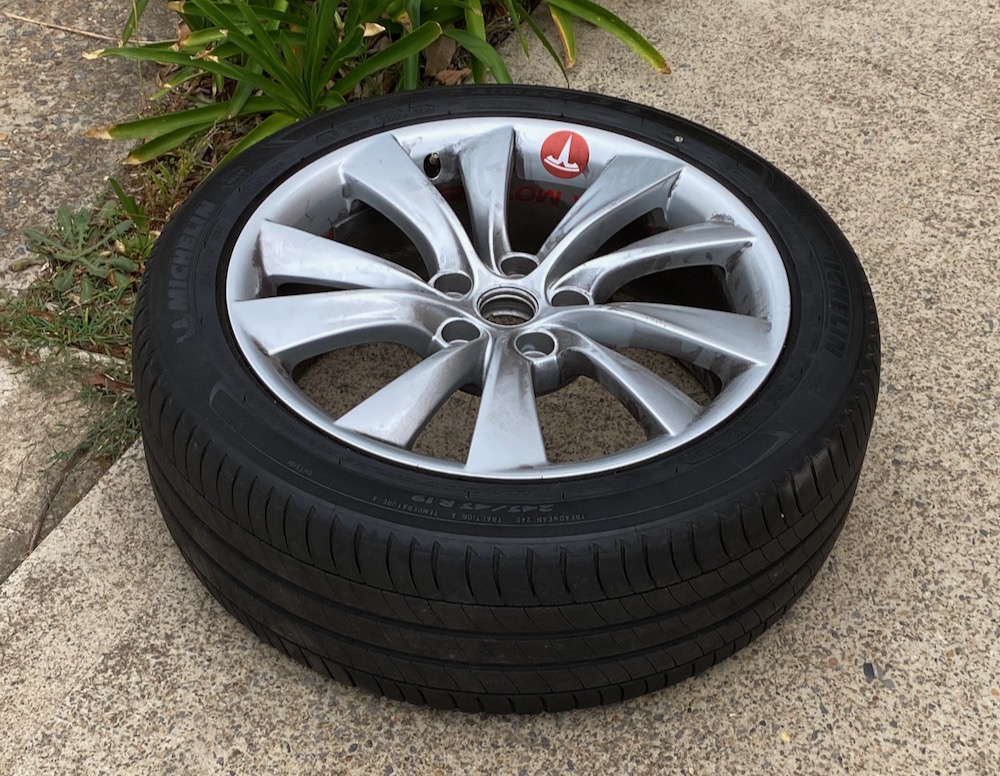 I haven’t had any service on the car. It’s not like there’s an internal combustion engine under the hood.

After a year I did book a full service but they asked me how many kms I had driven – which was under 10,000kms at that time – and they said my brakes and tyres would be fine and they cancelled the appointment.

Now I have hit two years I will book a service so they can give the car a once over – motors, brakes, tyres, battery and display.

I usually Supercharge once a week and they gets me through for about 5-6 days depending on how busy my week is.

If I need more charge I can always use my home charger which takes longer than the Supercharger. 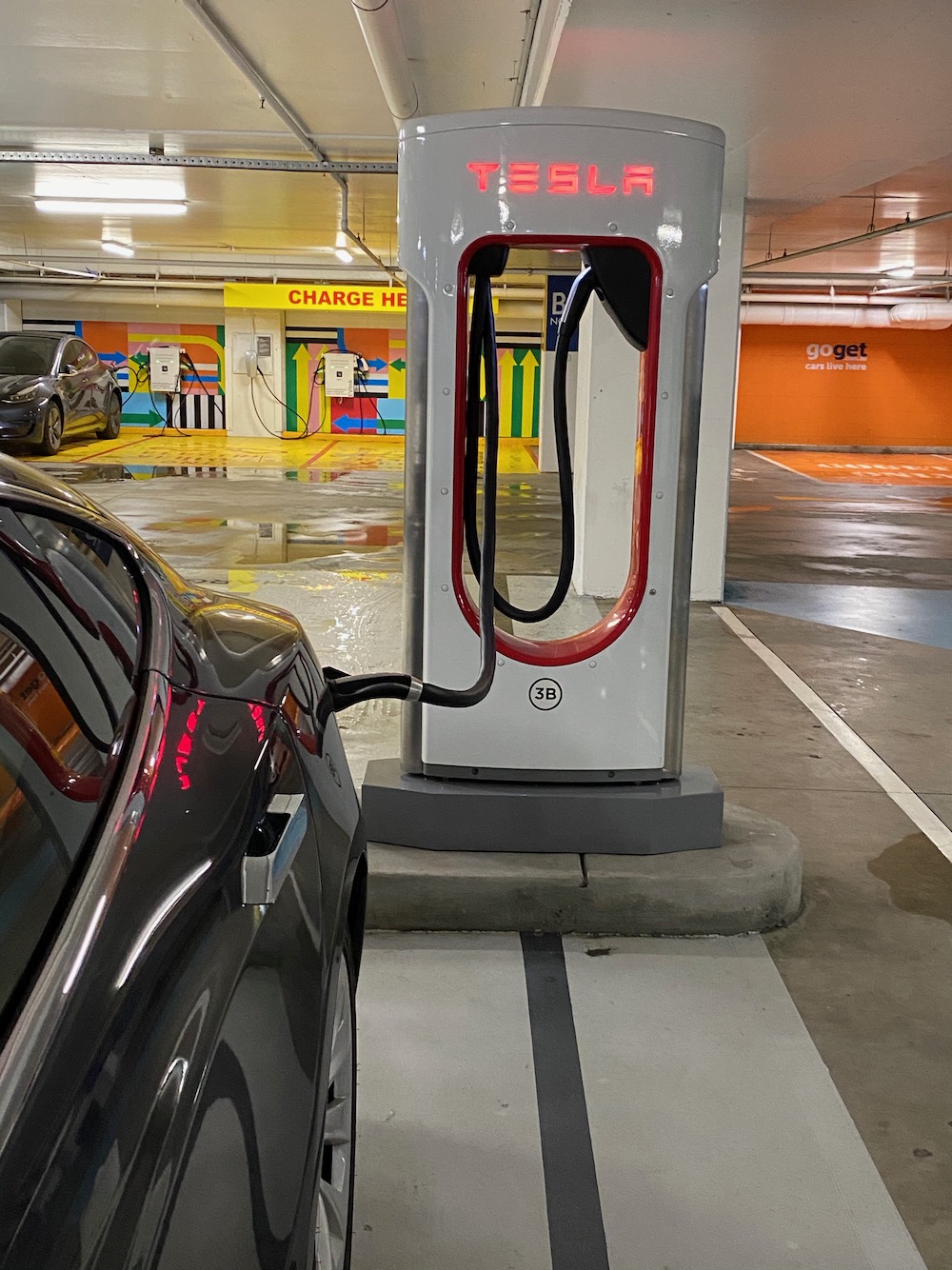 A Supercharger session usually takes about 40-45 minutes until I reach the daily driving limit of 90 per cent of the battery capacity.

In that time I usually do some work or watch stuff on my iPad. Other times I go grab a coffee or lunch.

On the day of delivery they told me today the car will be worst it will be – meaning that over time the car will improve through regular software updates and, boy, were they right.

The car is so much better today than the day I bought it two years ago.

There was a major software upgrade that changed the look and feel of the user interface that’s running on the large central display.

It’s exciting every time you get a notification about a software update and it usually results in a new feature or an improvement to an existing feature.

The best new features I have seen in the last two years was the front cameras on the car being utilised as a dash cam.

The side cameras – which are actually the sensors that detect other cars around you – are now also used in Sentry Mode which only works while the car is parked.

If someone passes near your car the video clip is recorded and stored a USB drive in the car.

One woman was caught red-handed scratching a Tesla Model 3 in Australia through Sentry Mode.

Other new features include Dog Mode – so your dog can be comfortable with the air conditioning while you’re out of the car.

I added Enhanced Autopilot (at an additional cost) about six months after I took ownership of the car.

At that time the Enhanced Autopilot package included extra features like Summon, where you can move the car through the Tesla app on your smartphone, and AutoPark that can accurately and easily put the car into parking spot.

If you were to buy a Tesla today, Autopilot is included free but it’s the only feature you get which means the car can auto steer, accelerate and brake automatically in freeway conditions and any other well marked road.

To get Summon and Autopark today you need to spring for the Full Self Driving package.

But my older Enhanced Autopilot also improved over time and added Smart Summon, where you can summon your car to your location from a longer distance. 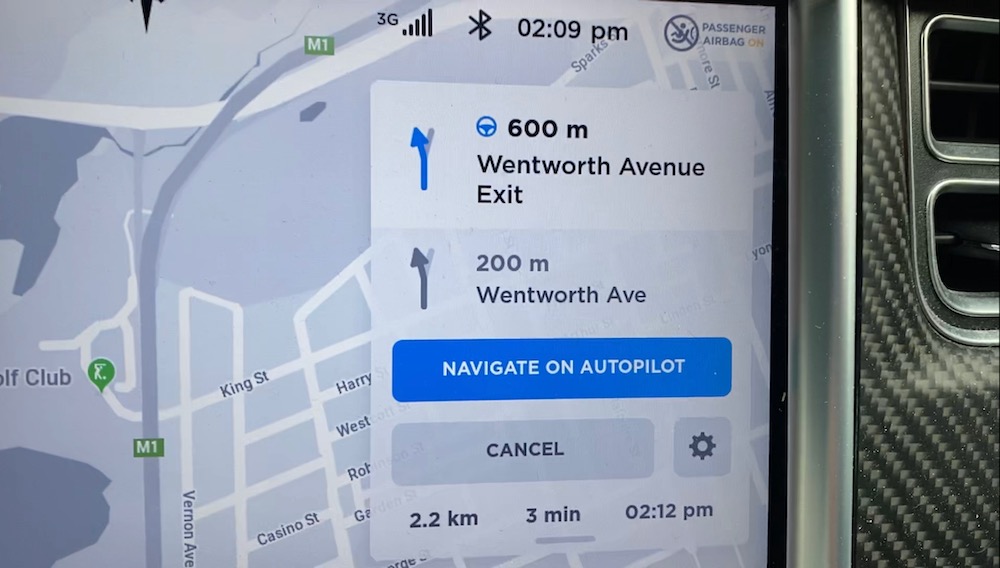 Imagine coming a shopping centre exit and instead of walking to the car – the car comes to you.

But it’s not something I’d be willing to try in a crowded carpark.

Another Enhanced Autopilot upgrade was Navigate on Autopilot so, if you have a destination entered into the navigation system the car will not only steer itself but also put itself into the right lanes to switch automatically to other freeways and even steer you into the right exit. Truly amazing.

The only issues I had with the Tesla Model S was a faulty door handle and the appearance of a yellow ring around the screen.

The door handle had an issue with the motor that moves the handle in and out of the door. When this fault occurred the car would act as if someone pulled the handle and open the rear passenger door. Tesla fixed this free under warranty.

The yellow ring around the display was from uncured glue used to attach the display to the frame.

To fix this, Tesla developed a UV tool which is attached to the screen to bleach it back to its original colour.

There was no need to replace the screen and it looked as good as new.

We were, unfortunately, involved in an accident in the Tesla Model S. It was a minor accident – and it wasn’t my fault.

A man opened his door on a narrow road just as I was passing and he collected my side passenger side mirror and damaged that side of the car. 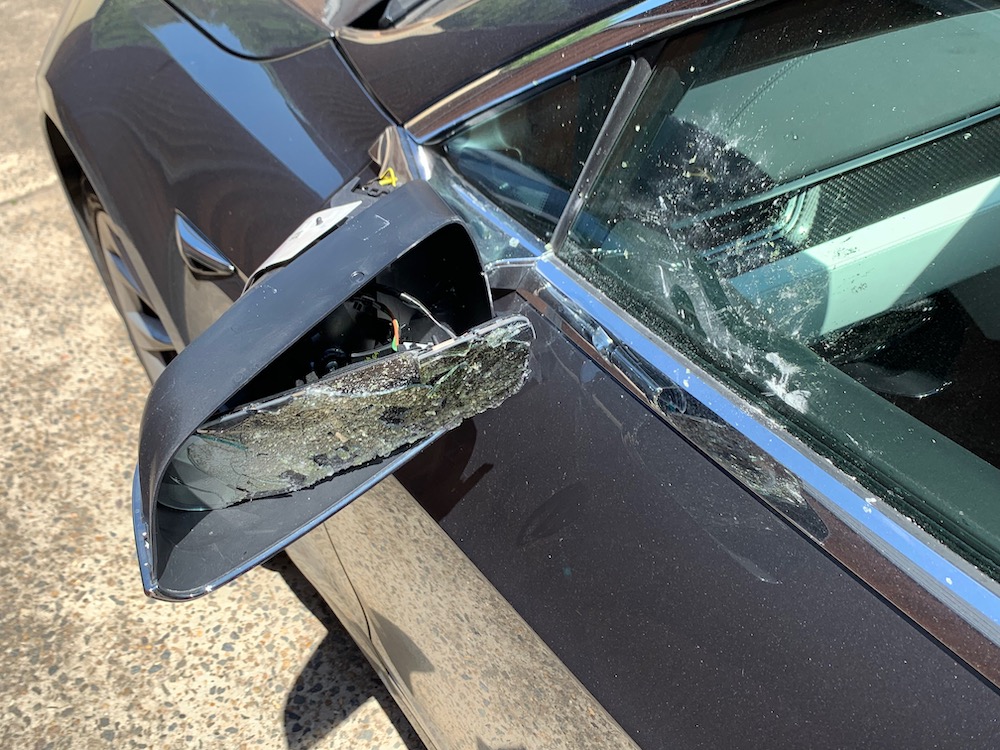 His excuse: he couldn’t hear me.

Anyway I had to book the car onto an authorised Tesla repairer who knew exactly how to repair the car’s aluminium panels.

We understand repairers replace the aluminium panels rather than panel beat them which I thought would speed up the process.

I soon discovered it would be a time consuming process because it involved a precision welding procedure which could only begin when the parts arrived. 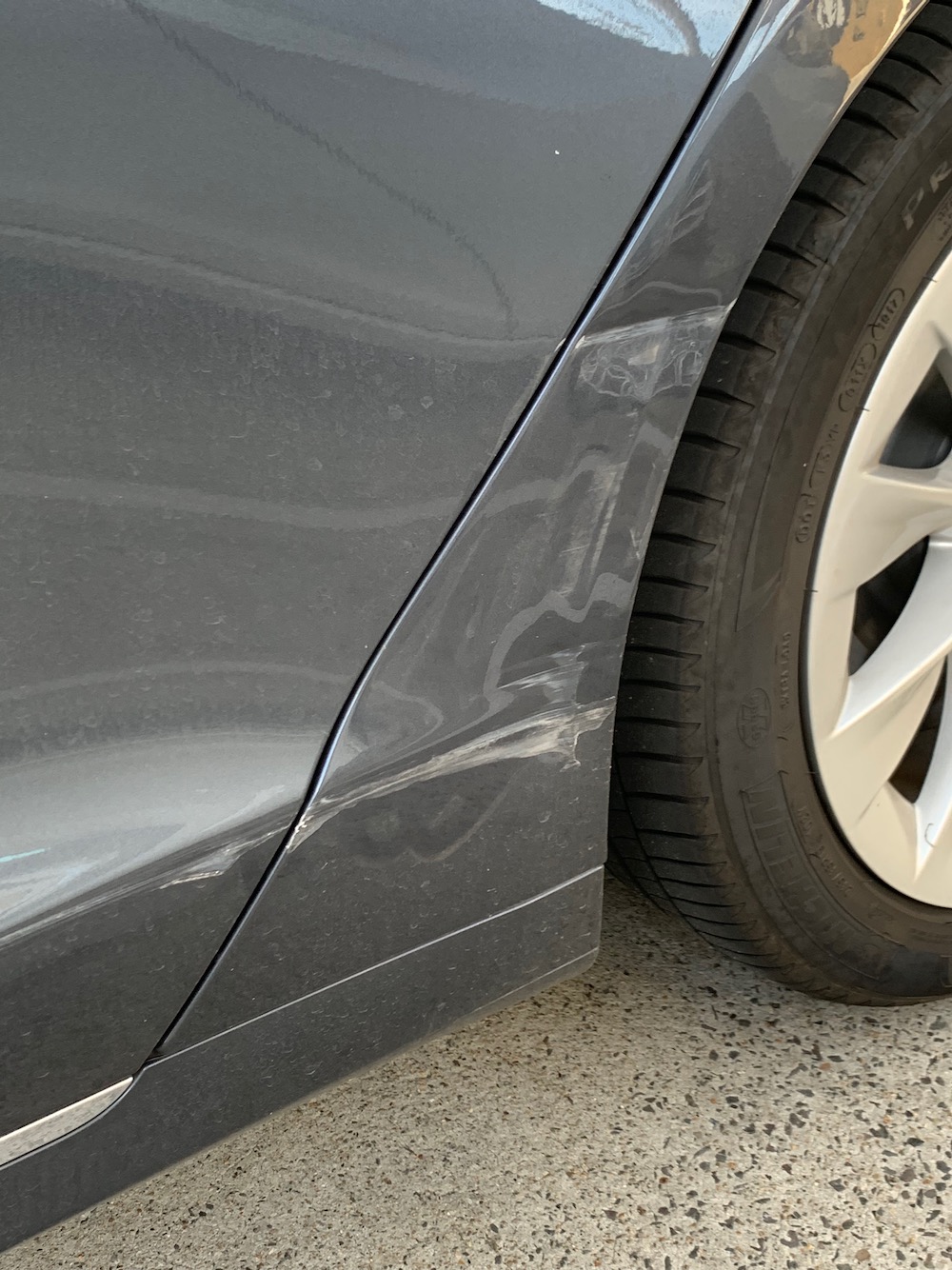 And once repaired, my car needed to be taken back to Tesla so they could check and recalibrate the sensors.

All up it took about five weeks which was relatively short for a Tesla repair. I’ve heard other repair jobs have taken two or three months.

I will never drive an ICE (internal combustion engine) car ever again. I am really happy with the Tesla Model S – it has more than exceeded my expectations. Buying it was one of the smartest things I’ve ever done.