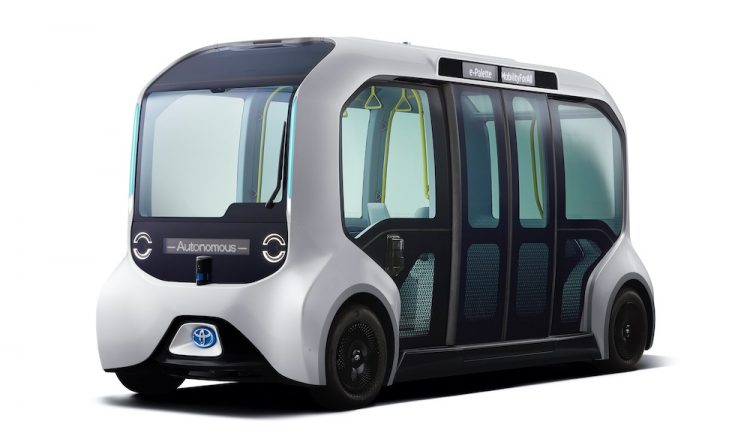 Walk on to the Toyota stand at the Tokyo Motor Show and you won’t see a single car. That’s because the motoring giant is focusing on its vision of mobility for society.

Of course it will still be producing cars, SUVs and utes but the focus for Toyota in Tokyo was the future and the part the company will be playing as it looks at artificial intelligence, robotics, electrification, automation, productivity and sharing.

The global carmaker wants to go beyond traditional auto manufacturing and has come up  with some remarkable new vehicles which will become the intelligent people movers of the future.

In fact, some will be deployed at the 2020 Tokyo Olympics (where Toyota is a major sponsorship partner) to help transport athletes, Paralympians and staff between venues and the Athletes Village. 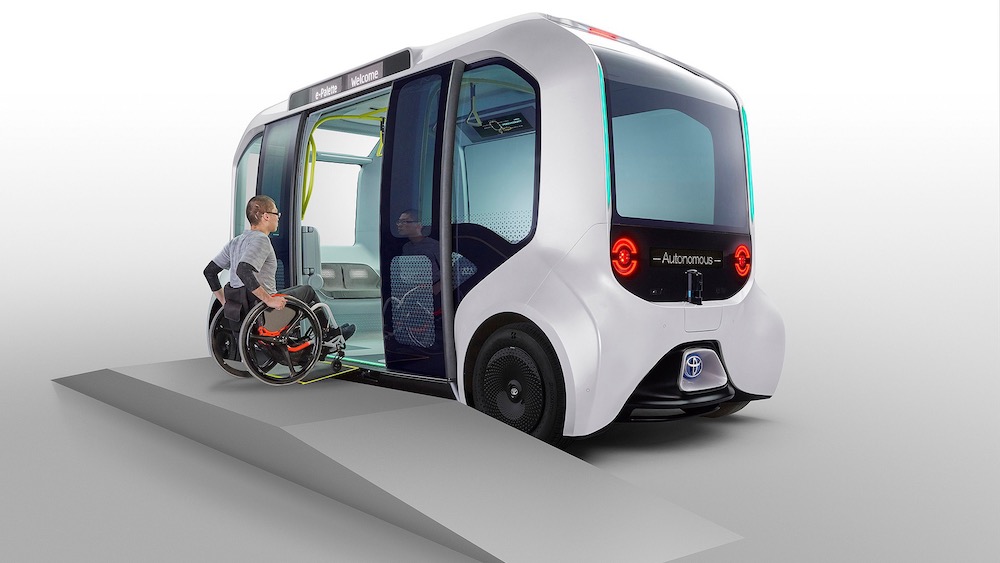 One such vehicle is the Toyota e-Palette which looks like a van but it can drive itself and offer smooth exit and entry for passengers.

It is 5.255m long and can fit up to 20 people onboard or up to four wheelchair passengers.

The cabin is a bright and open space and has a 1.3m door that creates a huge opening similar to what you would find on a train.

The vehicle offers low-speed automated driving using a 3D mapping system with obstacle avoidance and a top speed of 19km/h.

Toyota also unveiled an ultracompact BEV (battery electric vehicle) which will be launched in Japan in late 2020 along with an autonomous LQ concept car that wants to be your best friend.

The ultra-compact BEV is designed for customers who don’t need to drive very far for their daily errands and for people who usually drive alone.

There will be a version that will fit to passengers with a 100km cruising distance on a single charge through the on-board lithium ion battery.

The main goal of the LQ concept car is to provide automation but with a human touch.

It has a cloud connected assistant and a system that can learn about the driver and form a close bond.

Simply speaking, the LQ will really get to know you through natural language processing, sensors and system monitoring.

It will be smart enough to even detect a driver’s feelings and behaviour and come up with an appropriate response.

The car will even be able to detect when a driver is getting drowsy and strike up a conversation based on a subject of interest for the driver to keep them alert until the next rest stop.

Toyota hopes the LQ will gain more affection from the driver over time and become not just a mode of transport but a beloved car.

The carmaker hopes emotional value will become just as important as economic value.

The LQ will be used as a support vehicle for the Olympic Torch Relay in Tokyo in 2020.

Just to prove Toyota has a sense of humour, it also gave Tokyo Motor Show attendees a look at the new possible motor transportation – the Toyota e-broom.

The e-broom is actually modelled on a witches broom but instead of flying through the air it can move along the ground like a scooter and provide another fun method of mobility.

Another new vehicle to be released next year is the Toyota Mirai – a fuel cell electric vehicle that uses hydrogen to power a battery to run the onboard motors.

Also revealed in Tokyo was an all-new Yaris hatch which will include hybrid electric power.

* Stephen Fenech travelled to Tokyo as a guest of Toyota