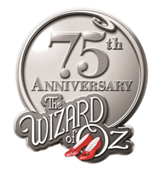 To mark the 75th anniversary of The Wizard of Oz, Warner Bros Home Entertainment is producing a remastered version of the iconic film in 3D for the first time.

The family favourite will be released on October 2 in a three-disc special collector’s edition ($99.95) which will include the 3D Blu-ray, the regular Blu-ray, DVD and an UltraViolet version of the film.

The 3D conversion has been a complex process carried out with the utmost care.

Original negatives were scanned to a very high 8K resolution with the 2D image transformed to 3D using a depth map for each frame.

“People have asked for years about The Wizard of Oz 3D conversion. My answer was always, ‘We’re not doing it until it’s perfect.’ And now it is,” said Ned Price, Warner Technical Operations’ Vice President of Mastering.

“As a kid, I was so enthralled by this film. Watching it, you just want to enter the frame, enter the Land of Oz. This new version will allow you to do just that.”

And included with every version will be an all-new making-of documentary along with extra content and Ultraviole copy.

“In this new 3D version, the film is bound to make history all over again—with both past and future fans.”