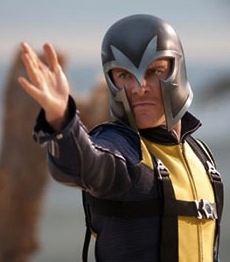 Fans of the X-Men films can go back where it all began with X-Men First Class which has just been released on Blu-ray Disc.

The Blu-ray edition of X-Men First Class includes the full high definition version of film on Blu-ray, a copy on DVD and a digital copy to watch on the go.

There are more than six hours of special features and extras including deleted and extended scenes and behind-the-scenes featurettes.

One of the most exciting features of the Blu-ray takes advantage of BD Live’s connectivity – Cerebro which is an interactive mutant tracker and character database.

Viewers can learn about their favourite mutants and their abilities and add to their character collection as more become available.

Visual effects supervisor John Dykstra has a resume that reads like a list of Hollywood’s biggesrt blockbusters including the original 1977 Star Wars film, Battlestar Galactica, Spider-man, Spider-Man 2 and Hancock.

Dykstra says X-Men First Class director Matthew Vaughn chose an interesting venue to when interviewing him to come aboard as visual effects supervisor.

“He and his wife were in the hospital when their baby was being born so it was one of the most interesting interviews for a movie I’ve ever done,” he said.

“His baby had just been born and we were in the hospital room next door talking about this movie.”

Dykstra says the film presented many challenges to not only visualise what was needed but to bring it to the screen in a dynamic way.

“With digital imaging, the beauty of it now is I can spend more time about what should be on the screen instead of wondering how we were going to get it there,” he said.

“We had to be responsible for characters who had appeared in movies prior to this and we also had to make the characters didn’t overlap too much – that they had their own distinct personalities.”

One of the things made obvious by director Vaughn was the movie need to have a certain feel to it because it was set in the 60s yet had to still feel sleek and modern.

“The picture needed to have a distinct flair in order to have a 60s quality to it.” Dykstra said.

“The idea of it was to have the quality of a Bond film which we discussed to make it feel open and have a lot of scope to it.”

Dykstra says that also presented some challenges in giving it the right look.

“We were shooting in London and we had to find all of these American environments and architecture in Britain which was really hard to do.”

The stars of the X-Men films are the variety of characters who each their own special powers and abilities.

Dykstra says he had to make sure each character had a uniqueness to them.

“We had to make sure the characters balanced one another and Matthew did a great job finding the personalities and back stories of the characters in the film and give them some real meaning,” he said.

“Instead of setting any limits in what the characters could and couldn’t do we went through and decided what would be the most fun.”

One of the most dramatic sequences of the film is when Magneto levitates a submarine out of the ocean – no easy task even for a visual effects guru like Dykstra.

“The idea that he was going to levitate this vehicle which weighs thousands of tons and displaces a huge amount of sea water was one of the biggest challenges of the shots,” he said.

“Making the boat come out of the water was something we knew how to do but the part that was really difficult was figuring out how to make the thing move fast enough to make it exciting and dynamic within the film and at the same time have the scale so you wouldn’t think it was a pool toy being lifted out of a tub by a labrador retriever.

“There were 15 or 20 layers of spray alone and that’s before you get to the layers of water sluicing off the ship itself and the interaction with the propellers and the spray that came off the props.

“And the cool part of working in the digital age is being able to move around the ship and find the best angles to show that dynamic on the screen.”

Other special features include a look at bringing the film from script to screen, casting X-Men: First Class, prosthetic make up tests, costumes and, of course the visual effects.