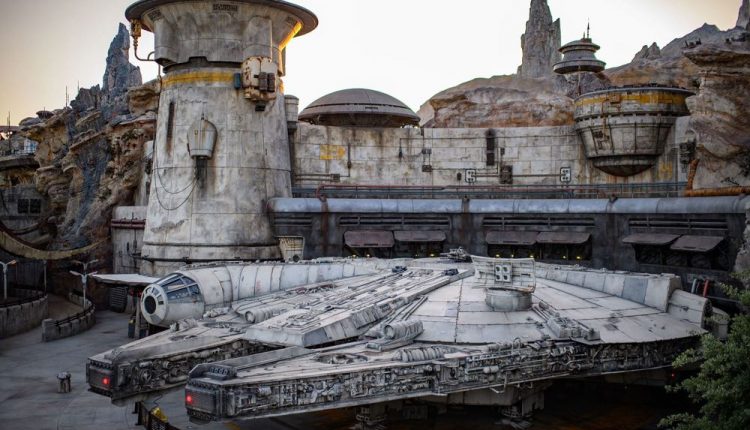 Take a look inside Star Wars Galaxy’s Edge where you can visit a galaxy far, far away

Now you can step into a galaxy far, far away with the opening of Star Wars Galaxy’s Edge in Disneyland – a 56,000 square metre development that’s been five years in the making at a cost of more than $1.4 billion.

Visitors are transported to a long forgotten planet called Baatu and the Black Spire Outpost. 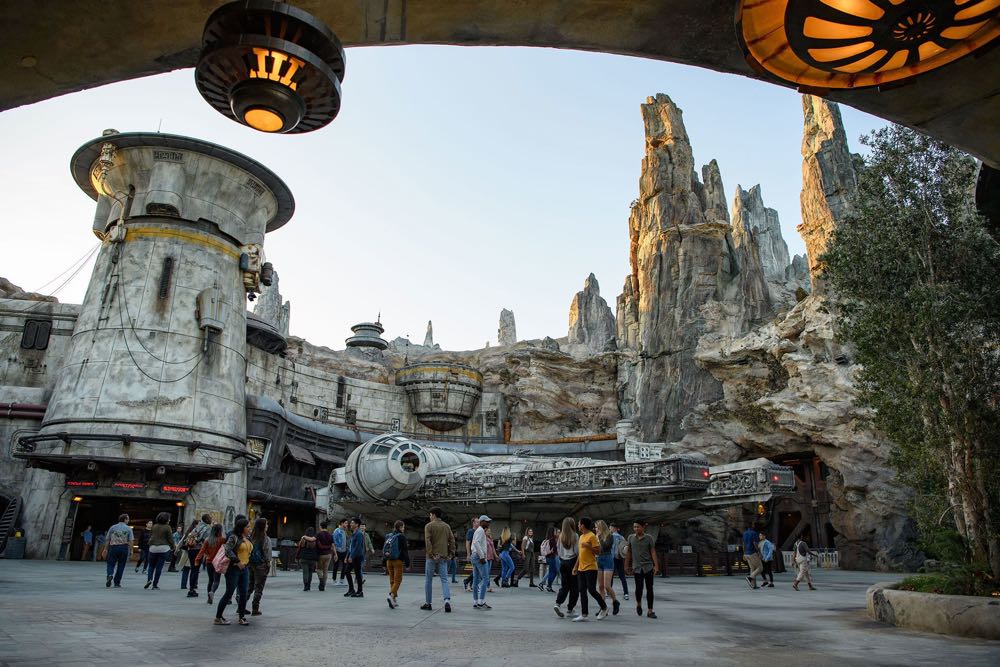 This location has not been seen in any of the Star Wars films but the storyline here reveals it as a place where scoundrels and Run are known to gather.

There have also been sightings of Resistance fighters which has attracted the attention of the First Order. 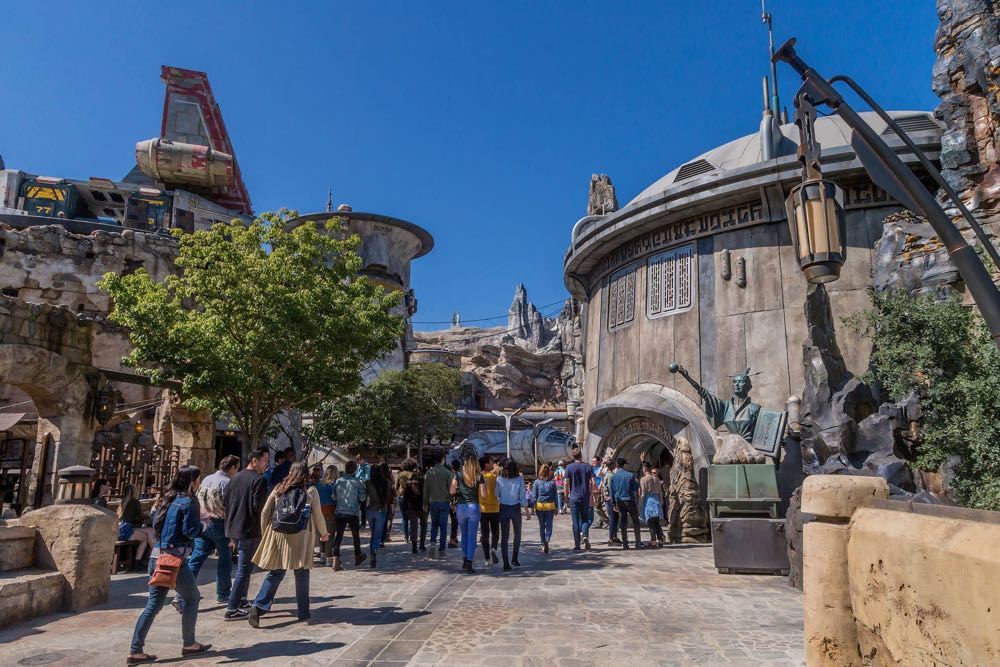 Disney opened the park to the world media before it was open to the public today.

At the heart of Star Wars Galaxy’s Edge is a never-before-seen life-size Millennium Falcon that’s more than 30m long. 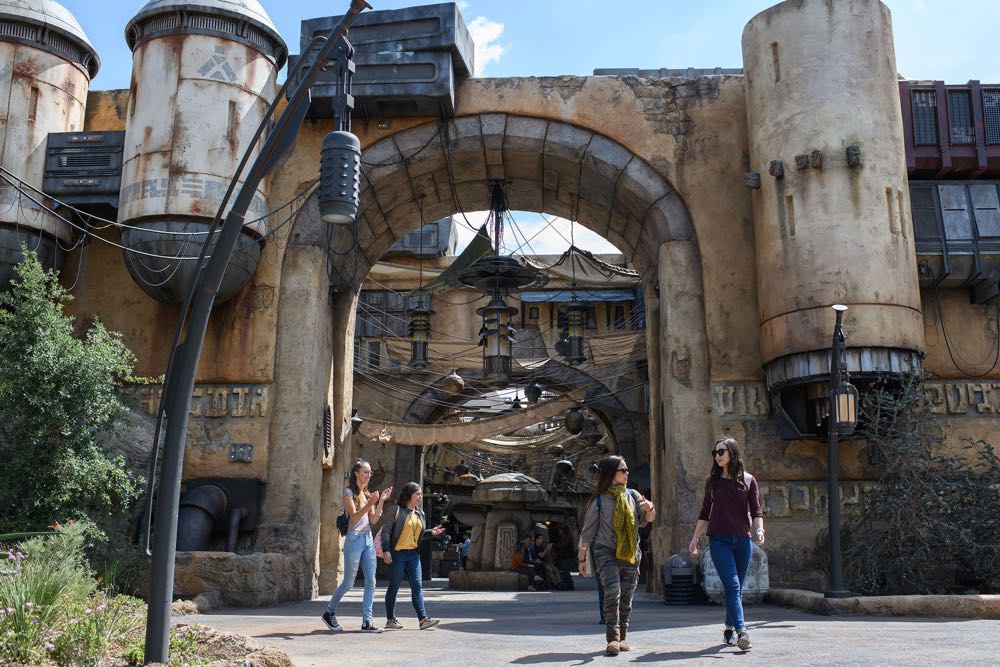 This alone will have Star Wars fans in tears.

The area is meticulously detailed right down to the last brick and is built to look like a village built on the crumbling remnants of an ancient civilisation. 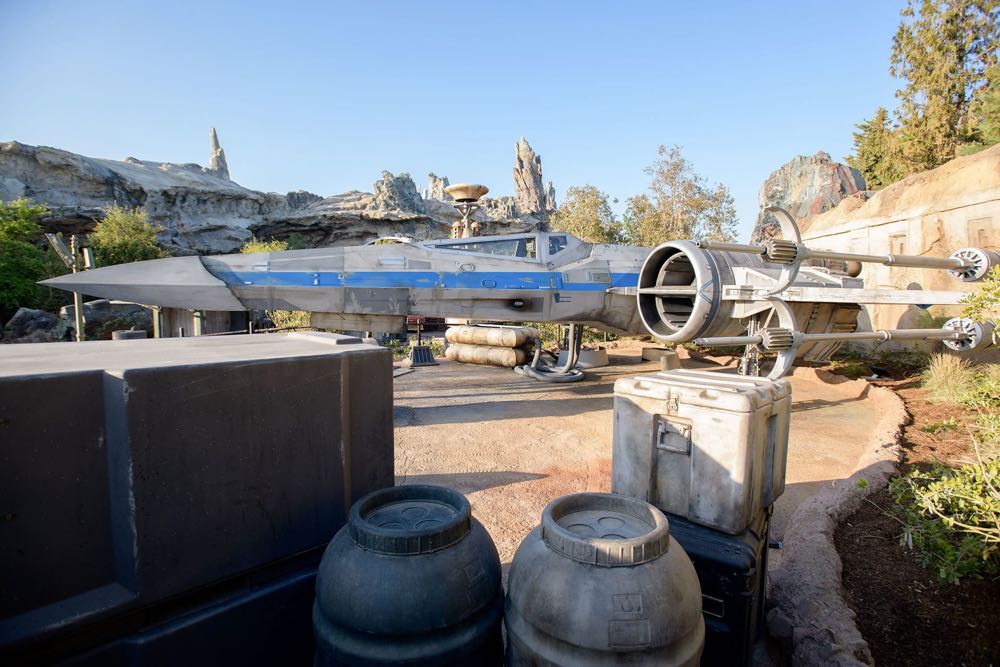 Park creators have even planted numerous Easter eggs in Star Wars Galaxy’s Edge that Star Wars lovers will recognise including the track prints of the actual R2-D2 droid used in the original 1977 Star Wars film.

But you can do a lot more than inspect the architecture. 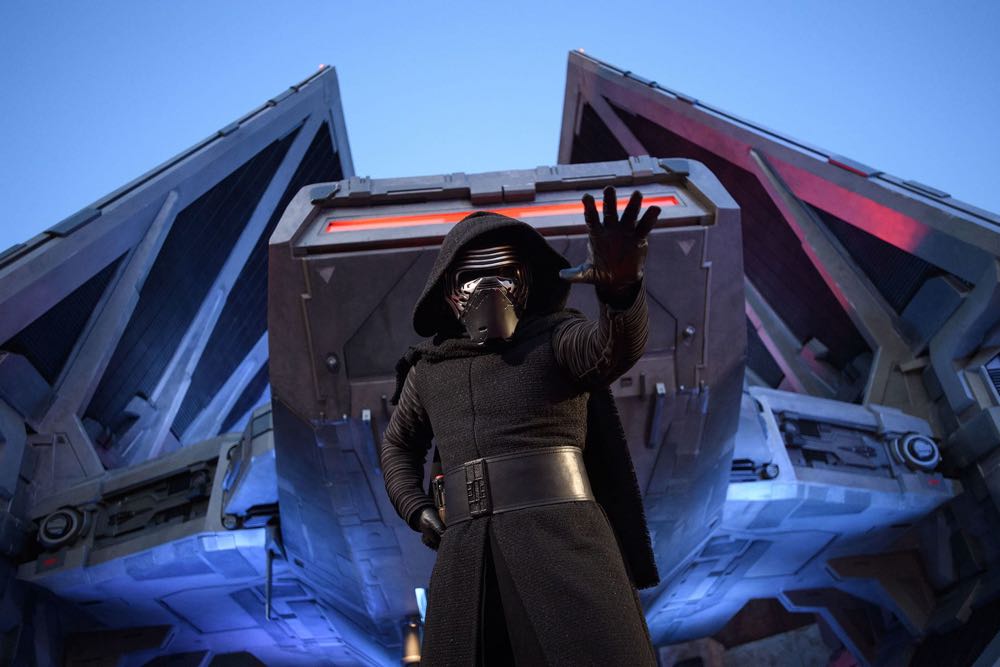 You can also admire other ships including Kylo Ren’s Tie Interceptor and Poe Dameron’s X-Wing.

One of the main attractions of Star Wars Galaxy’s Edge is Smugglers Run – a thrilling ride where you get to climb into the iconic cockpit of the Millennium Falcon and play your part either as a pilot, a gunner or an engineer. 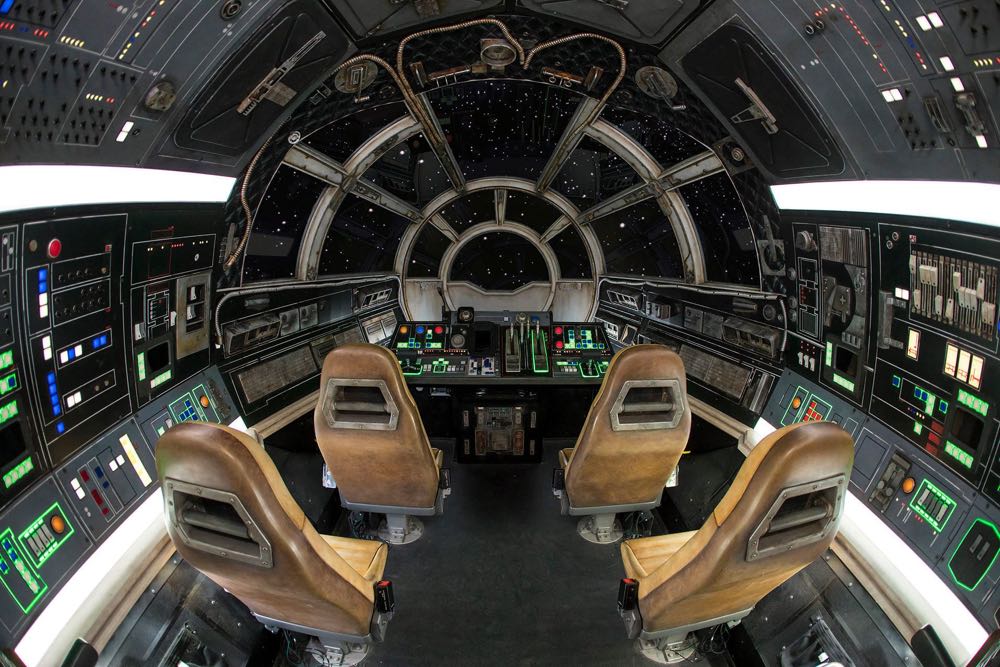 The interior of the Millennium Falcon seen in the Star Wars films has been faithfully recreated as part of the Smugglers Run adventure.

Opening later this year, will be another interactive adventure ride called Rise of the Resistance where you join the battle against the First Order. 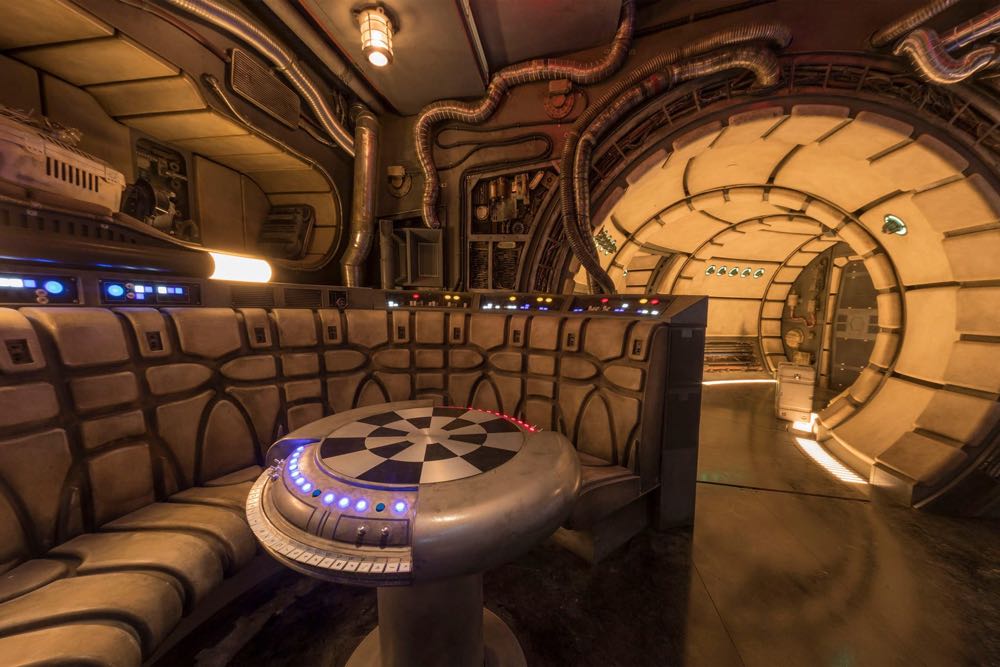 Naturally there will be no shortage of merchandise at Star Wars Galaxy’s Edge as well as the opportunity to build your own lightsaber and create your own droid.

Savi’s Workshop will allow customers to hand build their very own lightsabre. 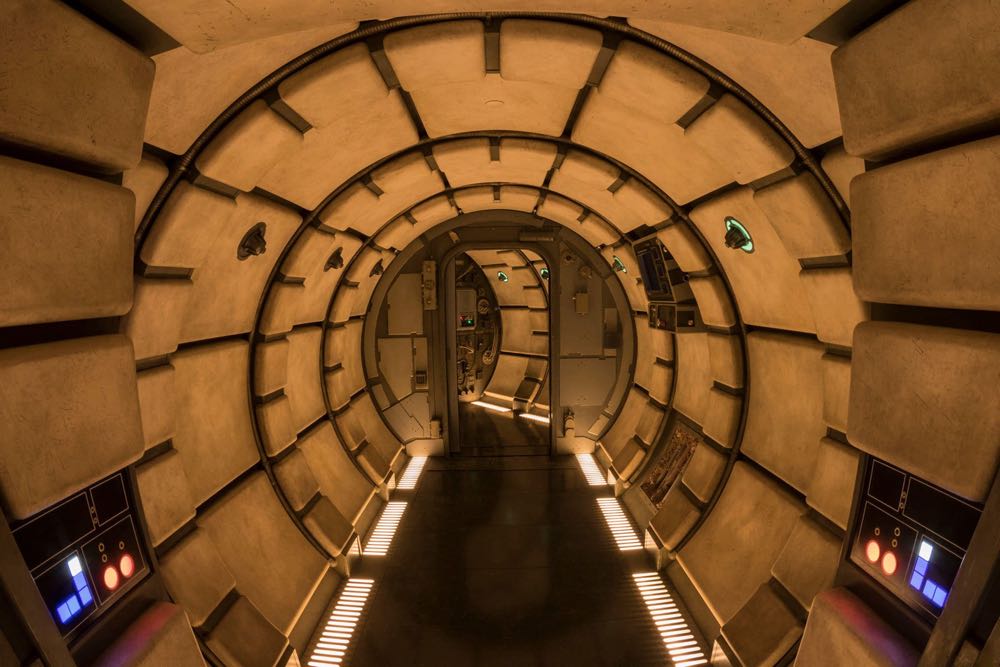 You get to choose one of four available hilt themes including Peace and Justice, Power and Control, Elemental Nature and Protection and Defence.

Gatherers will help you choose the heart of your lightsabre – the kyber crystal in either red, blue, green or violet. 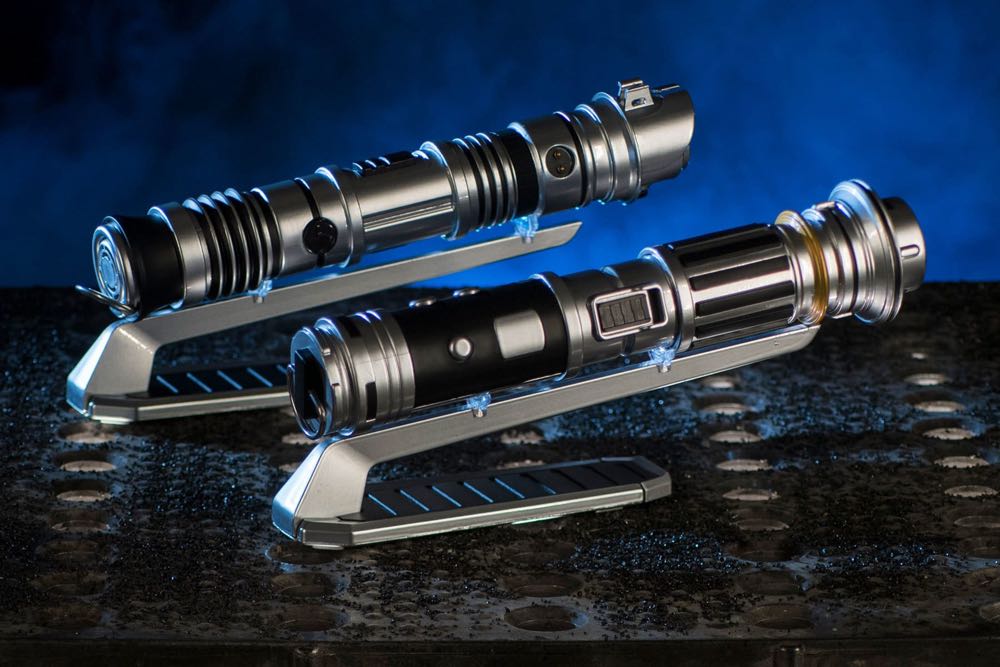 From here you begin assembling your hilt and add parts including sleeves, emitters, pommel caps, activation plates and switches.

Then your hilt is connected to a 31-inch lightsaber blade that is ready to activate. 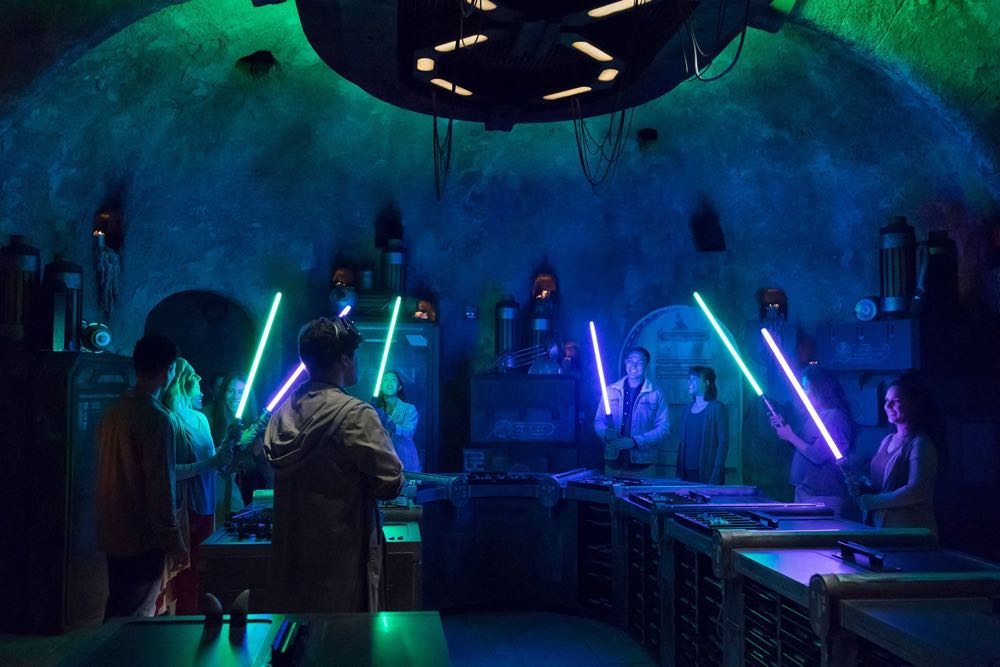 Each lightsaber will be $US199.99 plus tax and comes with a carry case.

If droids are more your thing, the Droid Depot will allow you to construct your own BB Series or R Series of droids. 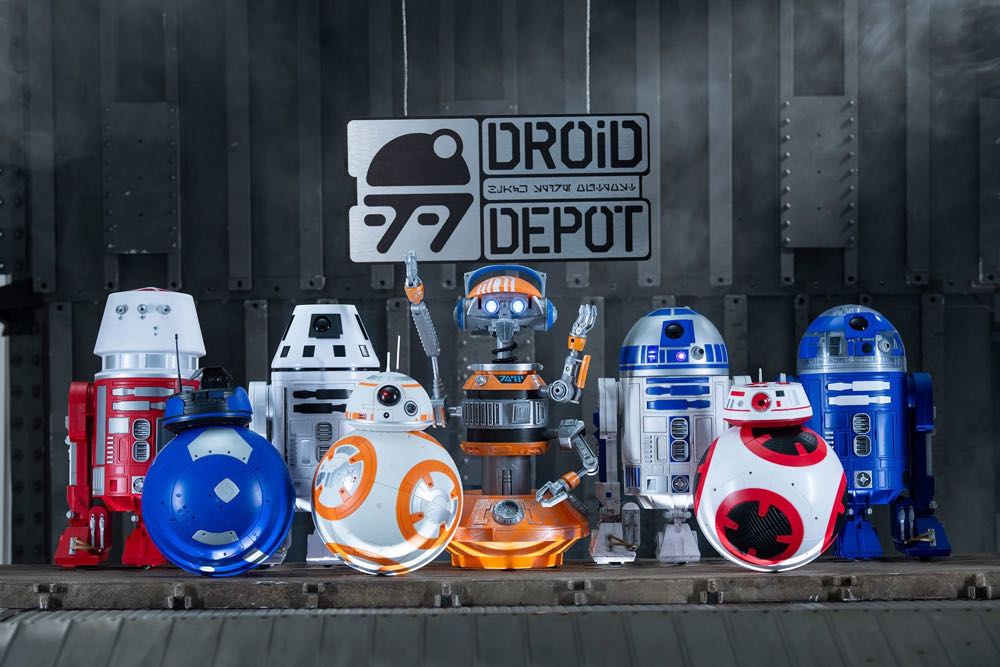 If you prefer the R Series, you can also choose a dome, body, centre leg and set of side legs. 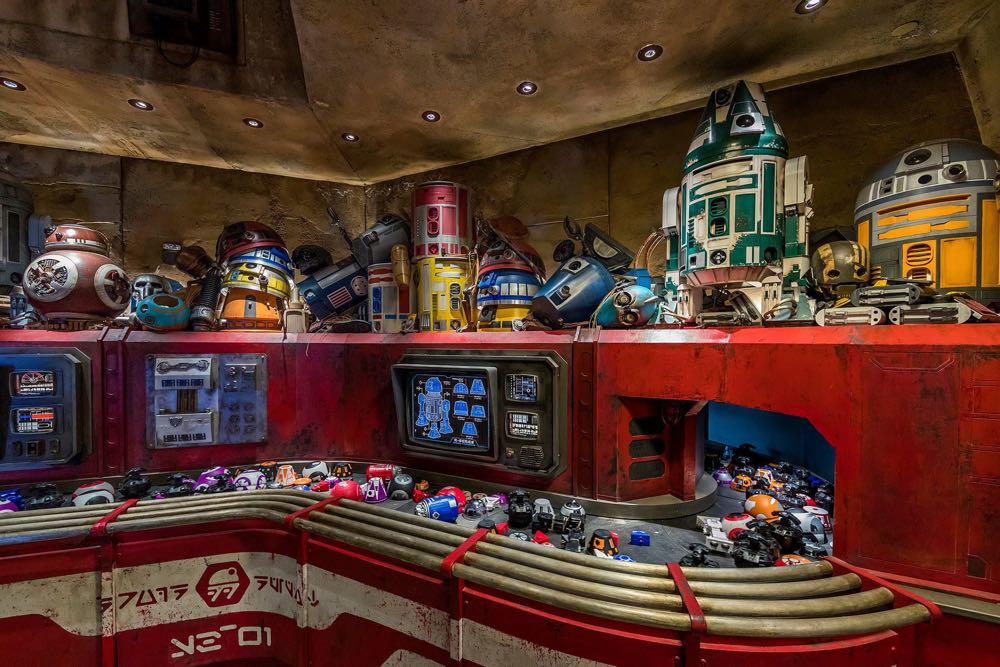 Each astromech droid will be priced at $US99.99 plus tax and comes with a carry box and instructions. 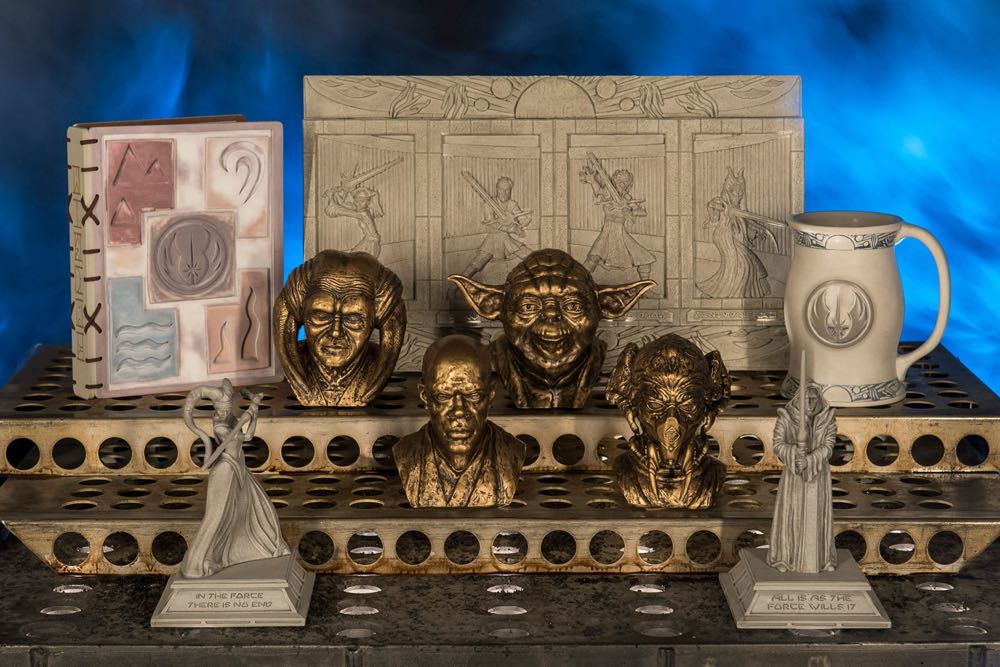 Black Spire Outfitters is where you will be able to create your own Jedi robes, battle gear and other clothing from the Star Wars universe.

The Creature Stall is filled with critters and creatures from across the galaxy to take home as a souvenir. 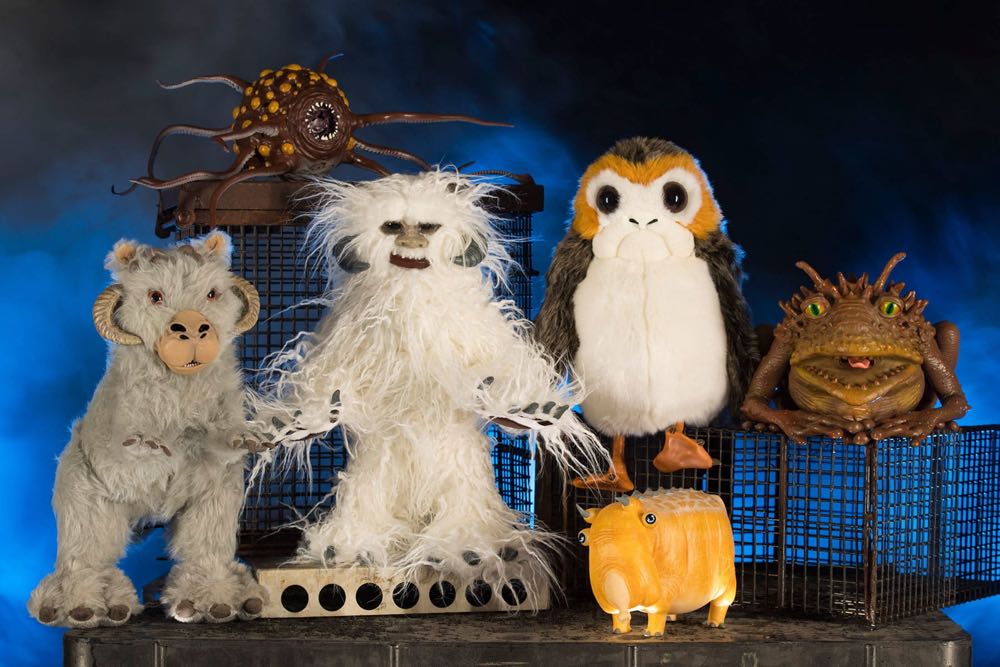 You will also be able to browse handcrafted toys and other collectables at the Toydarian Toymaker.

First Oder Cargo and Resistance Supply will also have a plentiful supply of toys, collectibles, t-shirts and other merchandise. 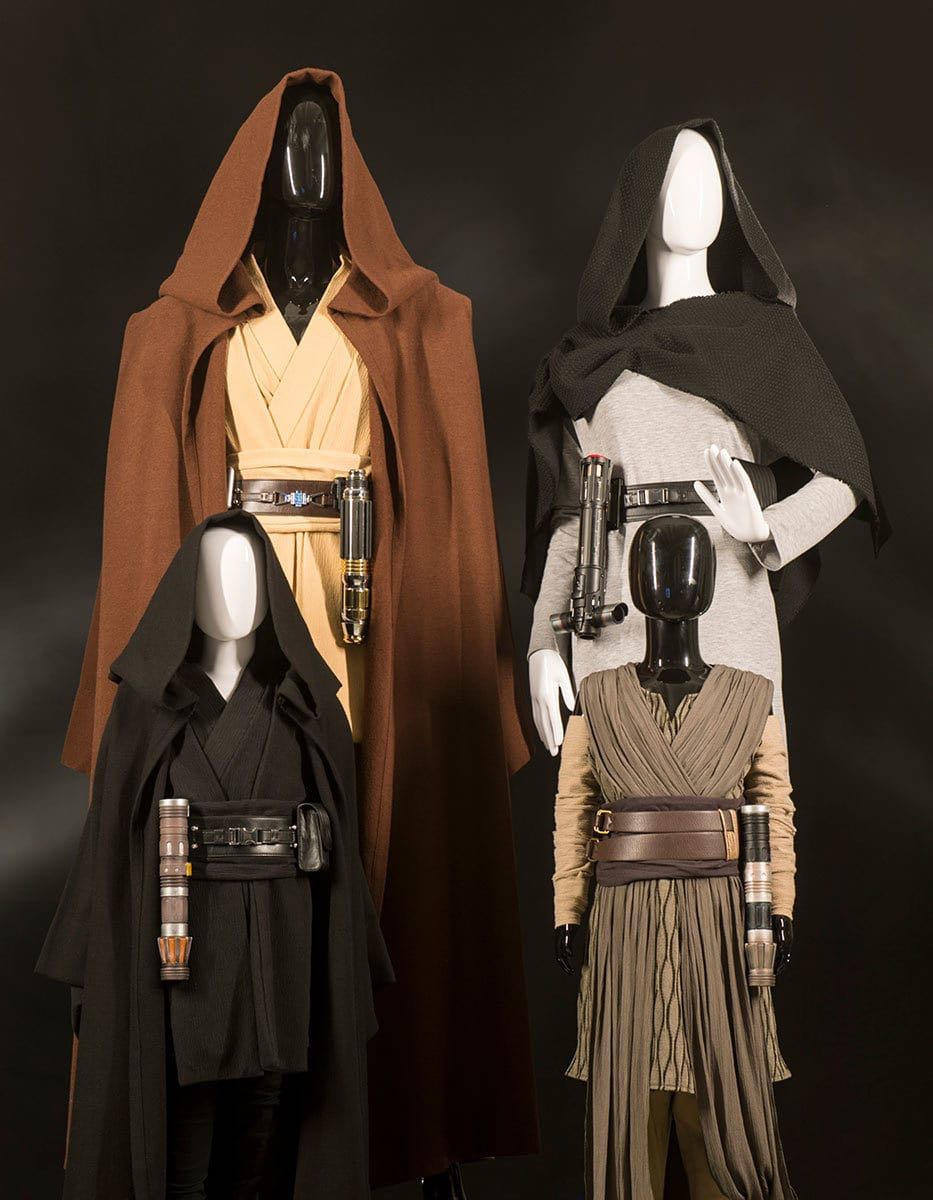 And of course, you can’t be roaming the Star Wars Galaxy’s Edge on an empty stomach.

Docking Bay 7 is where you let your taste buds take off with a selection of delicious and creative meals. 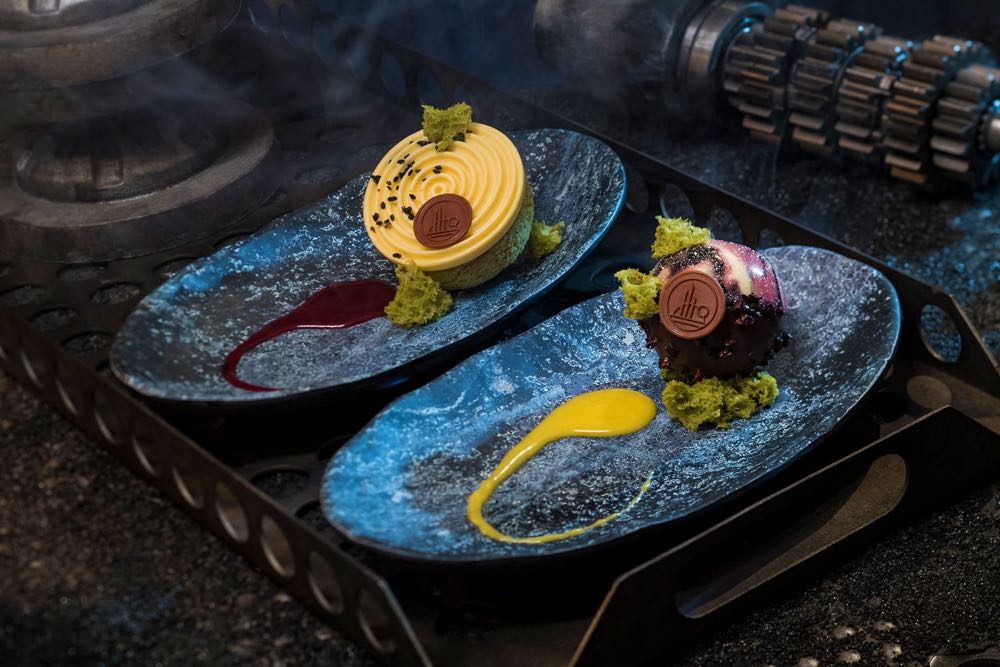 There are numerous other food stations including Oga’s Cantina where you can sample exotic concoctions for young and old.

You can also try the blue and green milk made famous in the Star Wars films and other frozen treats at the Milk Stand. 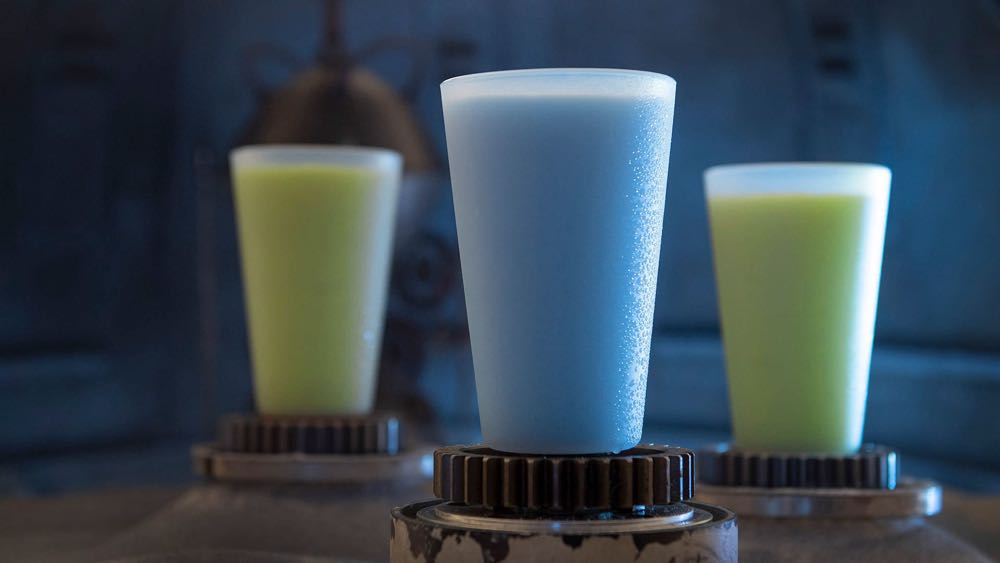 If grilled sausage or a roasted pork wrap is more your speed then head to Ronto’s Roasters or Kat Saka’s Kettle for a sweet or savoury popcorn snack.

Star Wars Galaxy’s Edge opens today and people visiting before June 23 must have a reservation. 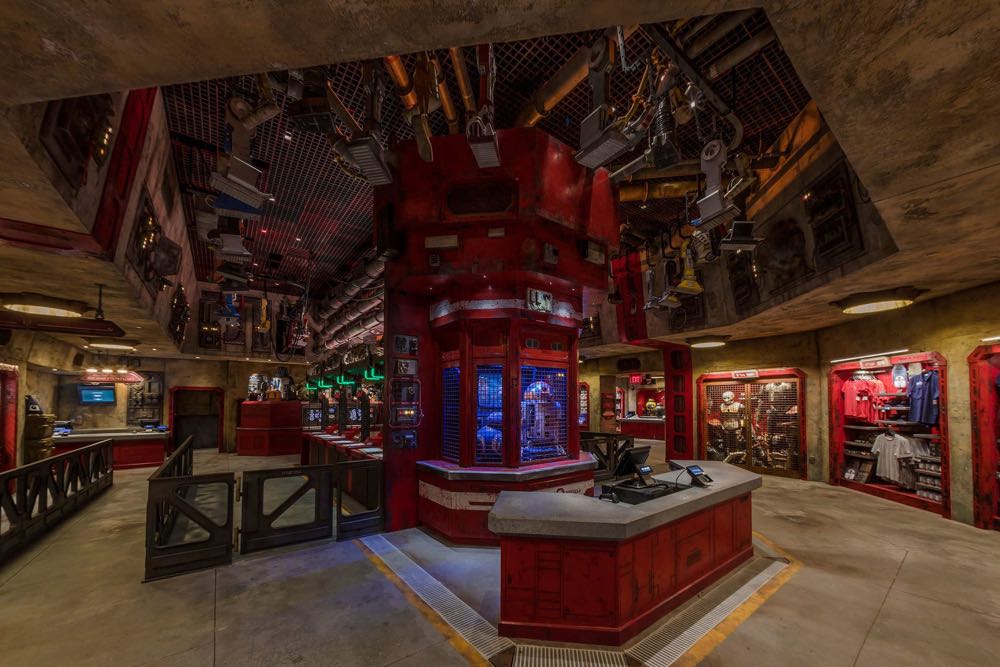 Guests staying at one of the three Disneyland resort hotels up until June 23 will be given a designated reservation to access Star Wars Galaxy’s Edge.

From June 24 no reservations are required but will be subject to capacity. 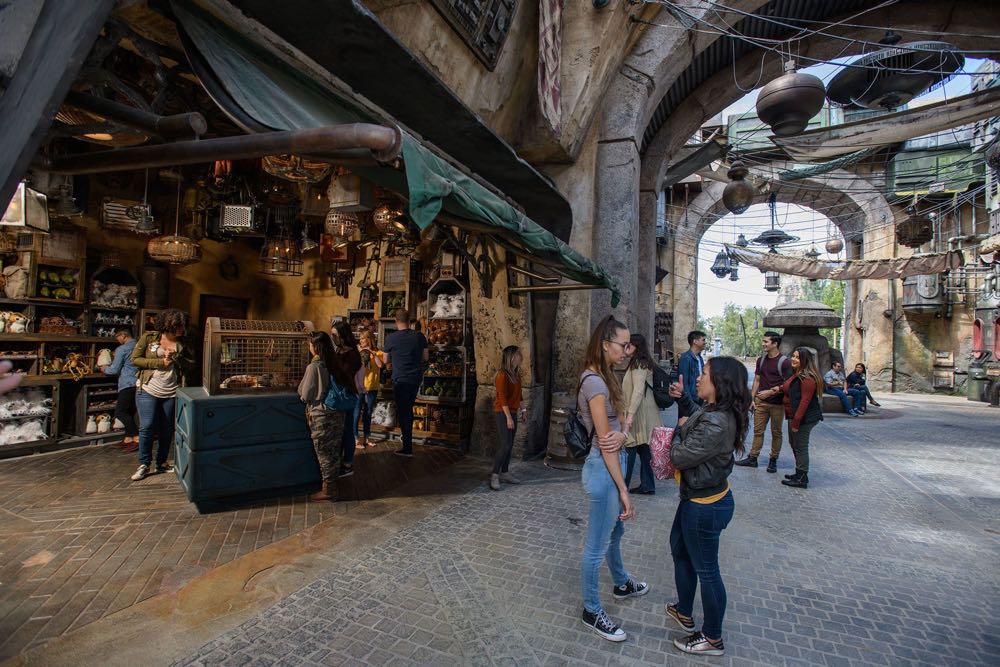