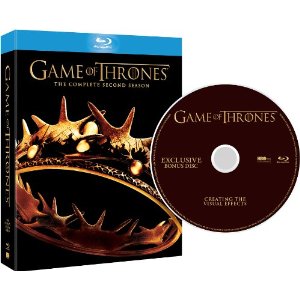 The third season of Game of Thrones goes to air on April 1 but you can relive season two which has just been released on Blu-ray and DVD.

Based on the bestselling books by George R. R. Martin, Games of Thrones is an epic series of families, war, honour and the pursuit of power that’s set in a mystical world of riveting and powerful characters.

One of the best things about the Game of Thrones Blu-ray, apart from the actual 10 episodes of season two, is the set of extra features which take viewers not only behind the scenes but also provide a guide to the events of the show and the detailed backstory.

The Blu-ray and DVD both have the behind-the-scenes features which include:

Creating the Battle of Blackwater Bay: A 30-minute featurette of the climactic episode which includes a look behind the scenes and interviews with the cast.

Game of Thrones Inner Circle: A round table discussion with the cast about their shooting experiences which is moderated by executive producers David Benioff and D.B Weiss.

The Religions of Westeros: Author George R. R. Martin and David Benioff and D. B Weiss discuss the religions of the Westeros and how they influence the characters of the show.

Character Profiles: The seven main characters are described by the actors playing them including Robb Stark, Renly Baratheon and Theon Greyjoy.

Audio commentaries: There are 12 commentaries with the cast and crew and the executive producers and author George R. R. Martin himself who discuss the show while you’re watching it.

On the Blu-ray Disc version of Game of Thrones Season Two there are additional extra features including:

War of the Five Kings: Viewers can keep track of the key players who are fighting to make their claim of the Iron Throne with this guide to their strategies, victories and defeats.

Histories and Lore: There are 19 animated histories which detail the mythology of Westoros and Essos and include illustrations from Game of Thrones storyboard artist Will Simpson.

In-Episode Guide: With such a rich and detailed program it’s handy to have this In-Episode Guide which allows viewers to access background information and relevant histories while they are watching.

Hidden Dragon Eggs: There are also a number of hidden Dragon eggs to even more never-before-seen content.

Game of Thrones Season Two is out now on Blu-ray Disc and DVD.