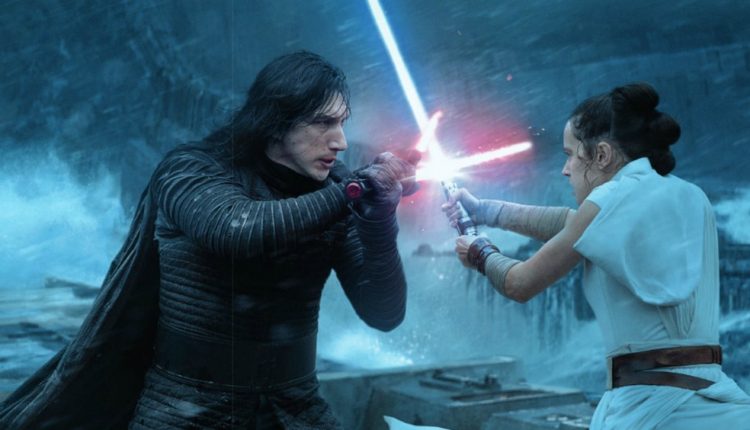 The ninth and final Star War film in the Skywalker saga – The Rise of Skywalker – has been released on 4K UHD but an equally exciting release on 4K disc is the original and prequel trilogies for the very first time.

Also on 4K UHD for the first time is Star Wars Episode VII – The Force Awakens along with Rogue One which is set just before the original 1977 Star Wars film in the story’s timeline.

Naturally The Rise of Skywalker looks remarkable in 4K thanks to a pristine transfer that also includes a 7.1.4 Dolby Atmos soundtrack as well.

For Star Wars fans it is definitely worth your while to invest in the 4K discs because they offer far more video and audio quality that even 4K streaming versions of the films which are currently available on Disney+.

And this goes for all 4K discs – they will always offer higher quality than their streaming version even though they have the same 4K resolution. 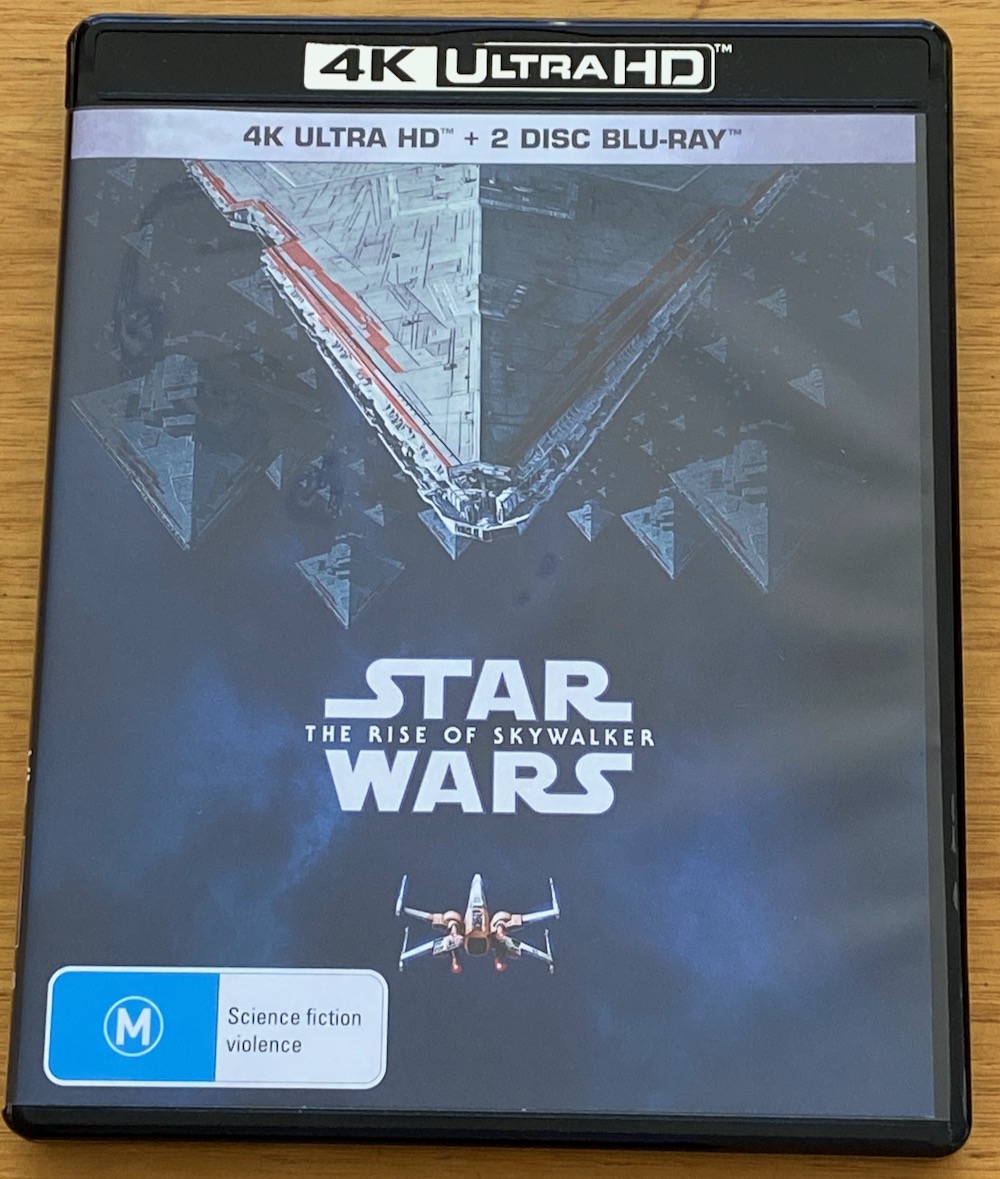 Viewing on a 4K disc will always offer higher quality for a number of reasons.

Firstly, they offer a repeatable high quality experience regardless of the speed of your internet connection.

Secondly the bit rate (the number of bits to provide the video and audio quality) is much higher off a disc than a streaming service.

A streaming service uses higher compression and  lower bit rate to reduce the file size to make it easier to stream.

And while there may be the same 4K resolution you don’t get the same depth of colour, the same brightness or the same sharpness around objects and finer details like hair and skin texture.

And then there’s the sound. The same compression of streaming services does clip the quality and streams often don’t include the same higher quality Dolby Atmos soundtracks.

High Dynamic Range (HDR) is also better off the disc so the clarity and contrast in the darker and lighter areas of the picture are even more detailed and defined.

With all that in mind here’s our take on the best scenes in the Star Wars films that will make you appreciate the quality you can enjoy from the 4K disc.

THE RISE OF SKYWALKER

These are the most recent movies and offer incredible quality as you would expect.

The Rise of Skywalker 4K disc showcases the vast amount of colours and shades as the story moves from the forest Rebel Base to the bright desert of Pasaana, the dark streets of Kijimi and the mysterious world of Exegol.

HDR also adds so much to the movie and offers great contrast to still appreciate the 4K detail even in the shadows and in brighter areas of the picture that would otherwise be washed out.

Showcase scenes: The skiff chase in the Pasaana desert not only provides sharp visuals but fantastic directional audio that will use every speaker in your system or make your soundbar work overtime.

Rey and Kylo Ren battling it out on the ruins of the Death Star beside monstrous seas is also a treat for the eyes and the ears. 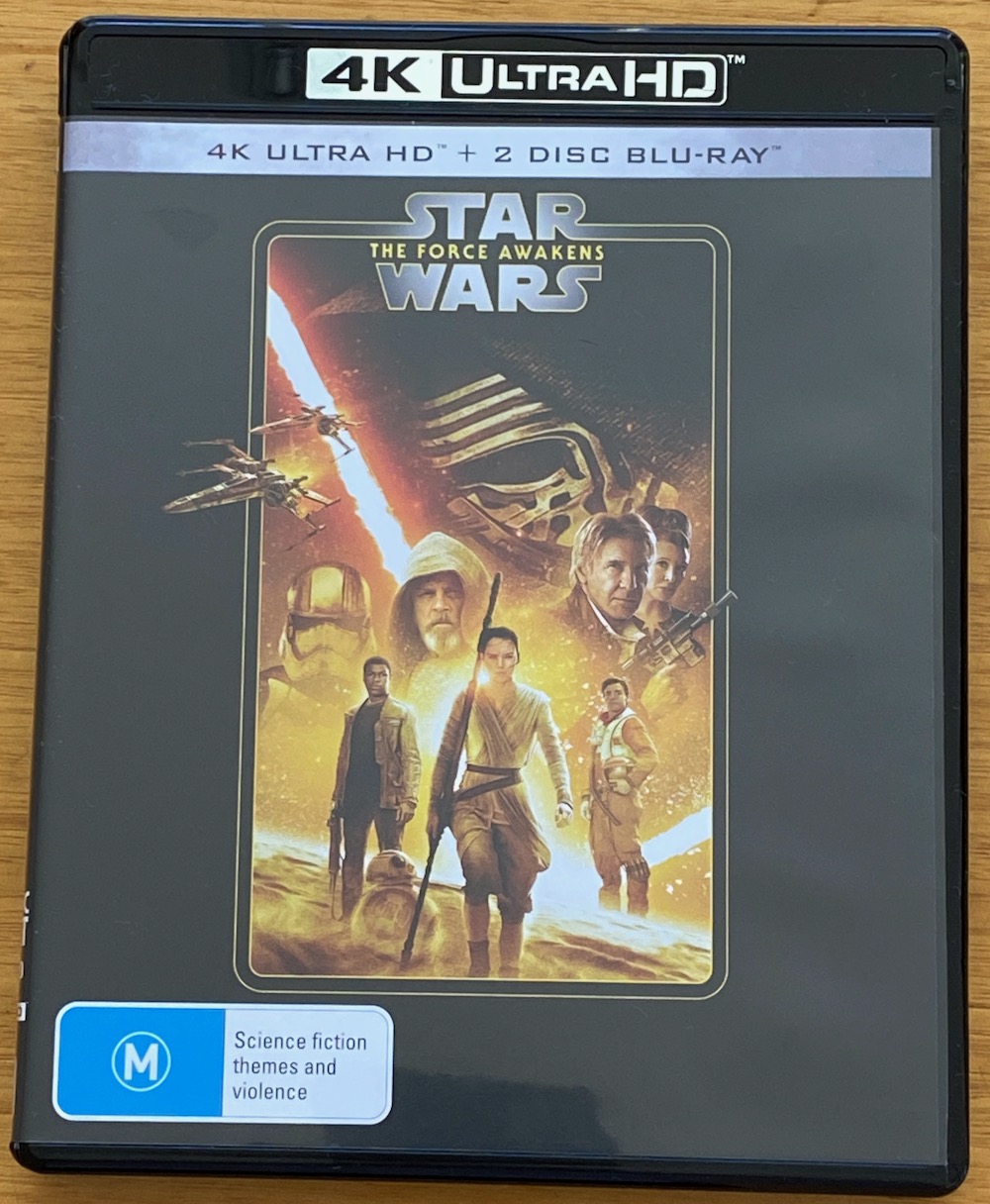 Even though the film was released back in 2015, this is the first time we’ve seen the 4K disc release and it was definitely worth waiting for.

Showcase scenes: Rey and Finn running to escape the Tie Fighter attack on Jakku which leans on the HDR to offer stunning detail in the bright desert. On the audio side, the directional sound of the Tie Fighters circling and the Millennium Falcon speeding away to evade them was amazing. 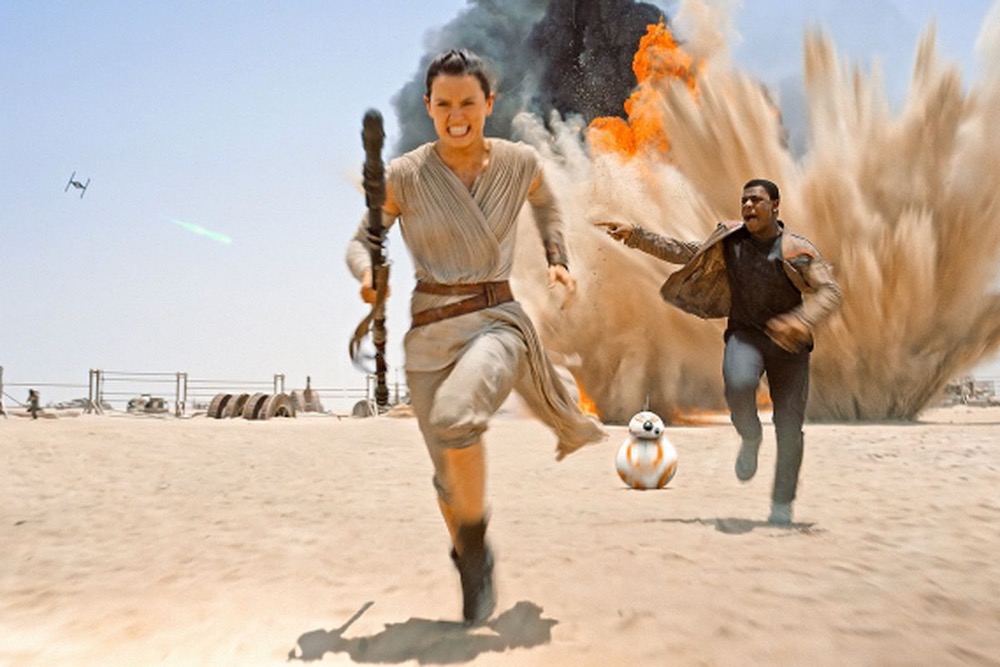 The attack on Starkiller Base and the lightsabre fight in the snow forest between Rey and Kylo Ren which are going on at the same time also showcases the HDR and audio quality.

The new 4K disc releases of Star Wars, Empire Strikes Back and Return of the Jedi are phenomenal despite the age of the films.

There have been several remasters over the years when the movies arrived on DVD and then Blu-ray and now 4K so they’ve been in great shape.

What the 4K discs revealed were details we didn’t know were there even though we’ve watched them hundreds of times. Like the scratches and marks on R2D2 and C3P0, the detail of Darth Vader’s helmet that is only now being seen in all its glory and the natural skin tones of Luke Skywalker and Princess Leia.

But what was also amazing was how much the HDR improved the image and showed off shapes and objects in the shadows we normally would have missed.

We did notice the films looked a lot more natural on 4K when compared with the Blu-rays which tended to be warmer with a more reddish tinge to the image.

And they also have Dolby Atmos soundtracks so you’re getting an entire added layer of audio that is aimed down at the viewer.

The attack on the Death Star at the end of the film looks like it was shot last month – impressive sharp picture and the sound that swirls around you. 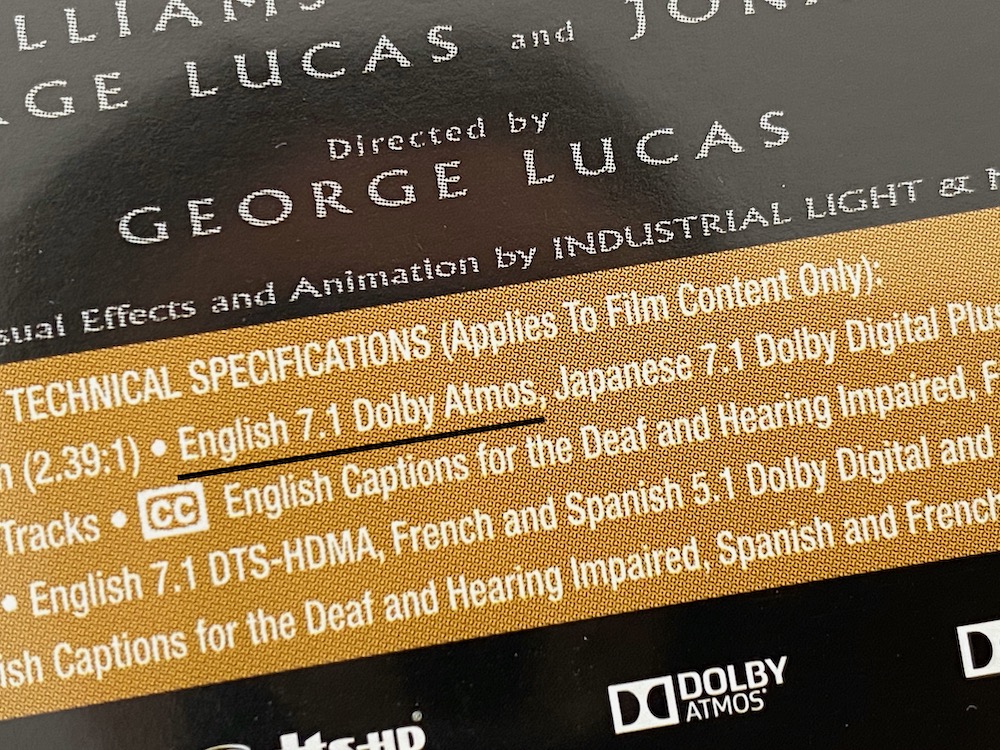 In Empire Strikes Back, the attack on ice planet Hoth by the Imperial ATAT walkers – again an HDR showcase with the snow attack and lots of Dolby Atmos sound going on from all directions including above.

The Return of the Jedi forest speeder chase is a standout with a lot of detail revealed in the trees and darker areas of the screen on 4K and HDR.

The final attack on the Death Star is also particularly pleasing to the eyes and the ears on 4K.

It’s the first time we’ve see the Prequel Trilogy on 4K and look impressive but despite being made more recently they don’t match the amazing quality of the Original Trilogy.

They still look fantastic but don’t have quite the same polish to them.

We suspect this has something to do with the fact they were all shot digitally and not on film like the original movies. 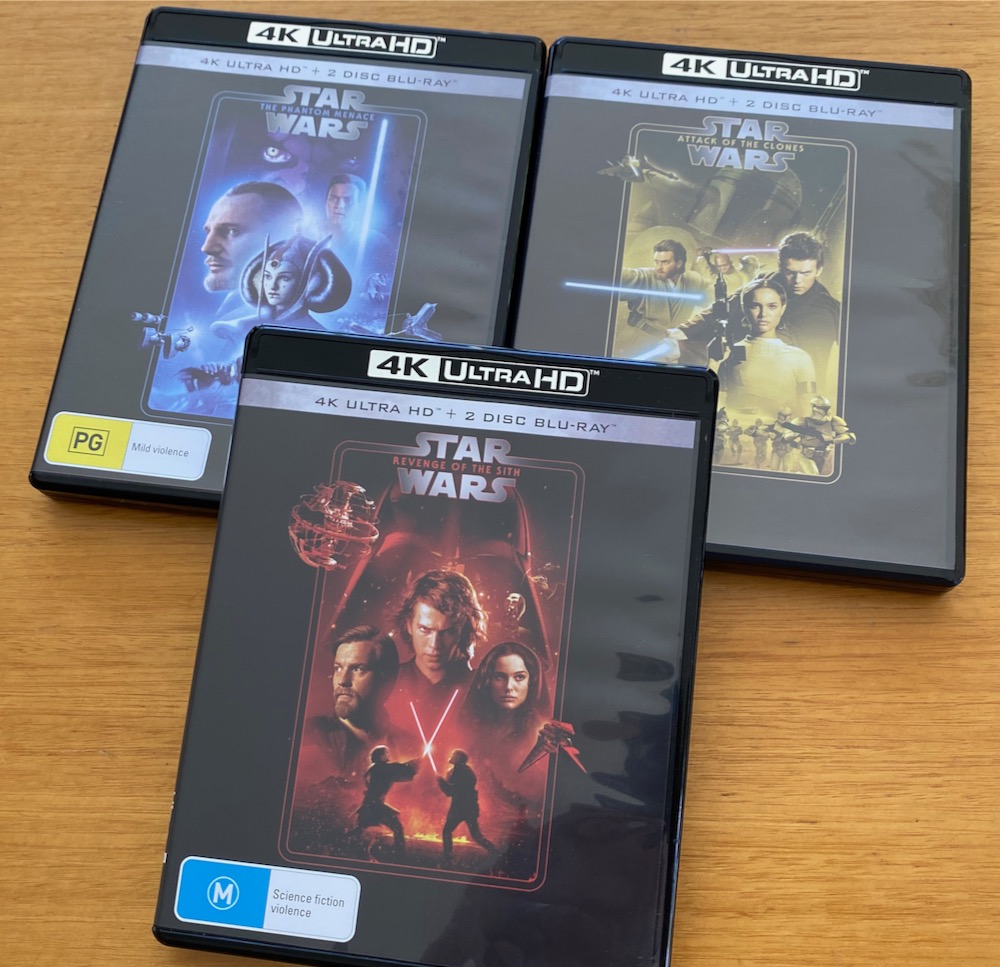 And the large amounts of CGI special effects also make for a more difficult transfer.

But the sound quality has taken a serious step up and the Dolby Atmos soundtracks are an absolute delight if you have the proper set up to appreciate them.

Showcase scenes: Hard to go past the pod race in The Phantom Menace which has never looked better and offers some of the best sound you’ll ever hear in any Star Wars film.

The speeder chase in Attack of the Clones is a standout and demonstrates the improvements HDR can offer.

The opening battle in Revenge of the Sith also looks pristine and makes all of your speakers work over time.