Audi has unveiled the latest innovations that will be included on the 2016 A4 sedan to enhance safety and connectivity and take drivers a step closer to an autonomous driving experience.

Technology has become an essential addition to our vehicles to add not only convenience and connectivity but also dramatically increases safety as well. 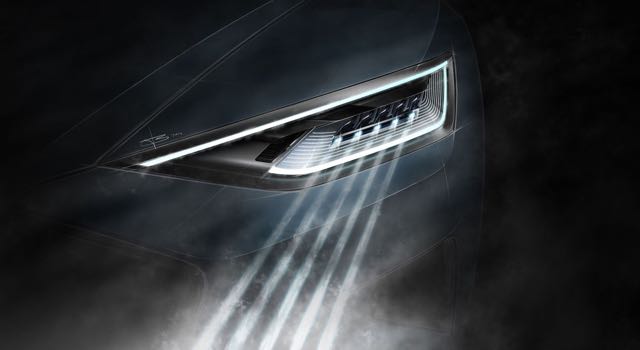 The headlights on the Audi A4 are intelligent enough to give you sufficient illumination without blinding oncoming drivers.

Using radar, the vehicle can see detect objects in the distance and shield them from the bright high beam light using individual controlled LED units.

In fact, the matrix LED headlights can provide up to eight fingers of light depending on the number of incoming vehicles on the road.

Also on board is a laser light which increases in range up to an incredible 500m the faster you drive.

A concept feature being tested is a roadwork mode that can project a light on the road ahead of the vehicle to act as lane markings if they are not detected on the road surface.

The 2016 Audi A4 will have Car Play and Android Auto onboard that will adapt depending on the type of smartphone connected via a cable.

The apps that can be safely used behind the wheel will appear on the central display and controlled via a dial in the centre console.

Smartphones can also be connected wireless via Bluetooth to use the Audi’s own in-car system.

There’s even a SIM card slot so a driver can insert a data SIM to turn the vehicle into a wi-fi hotspot for the passengers to connect up to eight devices.

The connectivity from a driver’s smartphone is also used to provide Google updates for the latest satellite views for navigation and to access street view to make finding your address even easier.

An optional extra for the rear passengers is the Audi tablet which runs the Android operating system to run apps but is also connected to the car’s system as well so it can be used to share navigation and entertainment options like music and radio stations.

The device itself is no ordinary tablet – it has special safety screen that will not shatter in the event of an accident and with reduced glare for comfortable viewing of content.

The Audi tablet can be taken out of the car and used like a regular tablet but it needs to be reconnected to the vehicle at least once every 30 days or it will be locked and unusable.

The Audi Q7 and 2016 A4 have 12 parking sensors as well as four cameras to provide drivers with information about their surroundings.

These are used to monitor the back and sides of the car to provide the driver with warnings and assistance.

Exit Warning advises when it’s safe to open the driver door. A red LED light in the door and the side mirror light are activated when a driver tries to open the door with an object in range of the side and rear of the car.

These sensors are also employed in the Rear Cross Traffic system which can give drivers notice of approaching vehicle when reversing from an obstructed space.

The sensor looks up to 100m ahead and judges the speed of the oncoming vehicle so it can prevent an unsafe right turn.

Park Assist not only lets a driver slot the Audi A4 into a parallel parking spot but can also assist drivers to park nose or rear first into a perpendicular parking spot as well.

Adaptive Cruise Control is as close to autonomous driving as you’re going to get with the system reducing the strain on the driver in congested traffic situations.

The vehicle can accelerate and brake automatically at speeds of up to 65km/h and follow the flow of traffic.

Predictive Efficiency takes the driver assistance even further by looking at topographical information of your route with instructions on when to slow down and speed up because it knows then you’re travelling up a hill, reaching a crest, rounding a bend and coasting downhill.

This results in an efficiency saving of up to 10 per cent.

Spotify reveals the most streamed music artists of 2015