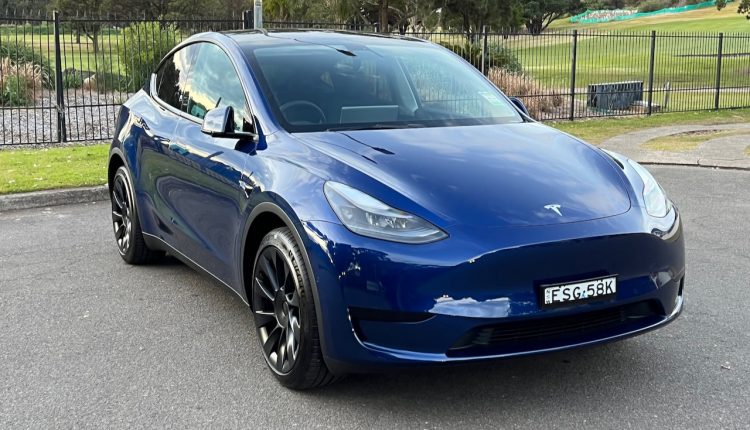 We take a first look at the new Tesla Model Y

The new Tesla Model Y has landed in Australia and Tech Guide got a chance to take a first look at the mid-size fully electric SUV just days after sales opened for eager customers.

We had the RWD model and while it was still zippy it is not as responsive as the Performance which can get drivers off the mark even faster.

We drive a Tesla Model S 75D which is also dual motor all-wheel-drive and we’re used to the pace off the mark.

If that’s what you want, then the Performance is your option.

You also get more range with the Performance Model Y at 514km compared with the RWD’s 455km.

We enjoyed driving the Model Y RWD – it was smooth and quiet and a pleasure to drive. 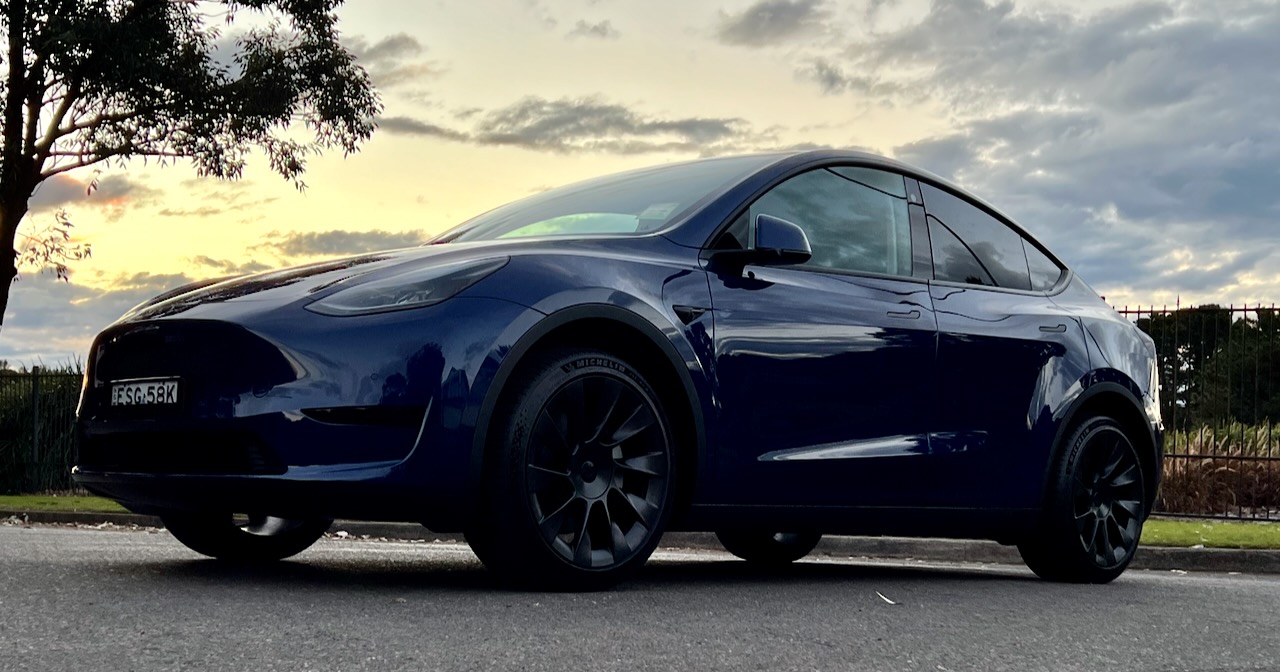 If you’re new to an EV, the silence is something you need to get used to especially when driving near people at low speeds and in shopping centre car parks.

You’ll need to pay attention because pedestrians might not hear you – and they might be absorbed in their smartphone – so you need to on the lookout.

The Tesla Model Y has a curvy design – by that we mean you won’t find too many straight lines on the vehicle.

It has the same wheelbase as the popular Tesla Model 3 and from the front the Model 3 and Model Y look almost identical with the same headlights and nose. 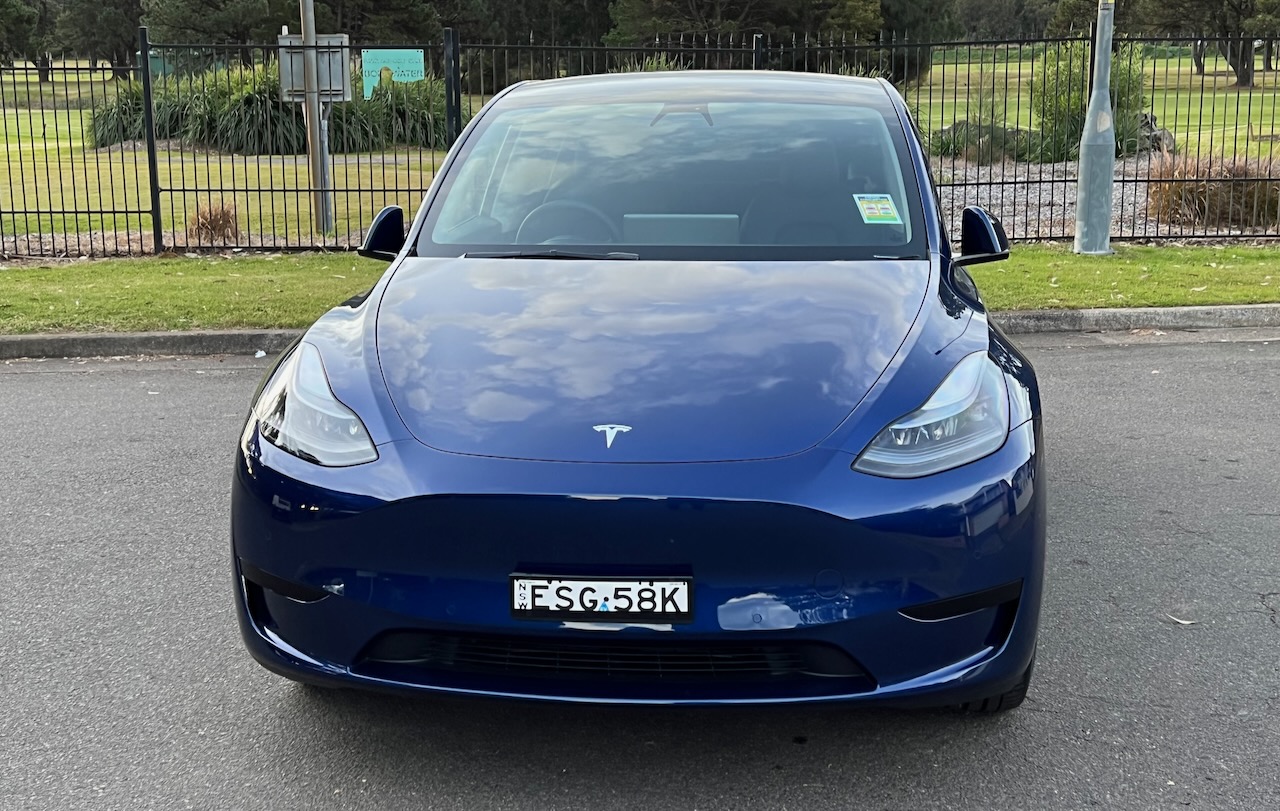 It’s only when you move around to the back half of the car that you’ll notice the difference.

Being an SUV, the Model Y has a larger back half to accommodate the increase storage space and added ride height for passengers.

This chunkier rear end may not appeal to everyone but in our eyes, the car has the right proportions and a good shape.

Beauty is in the eye of the beholder as they say, and we liked it. 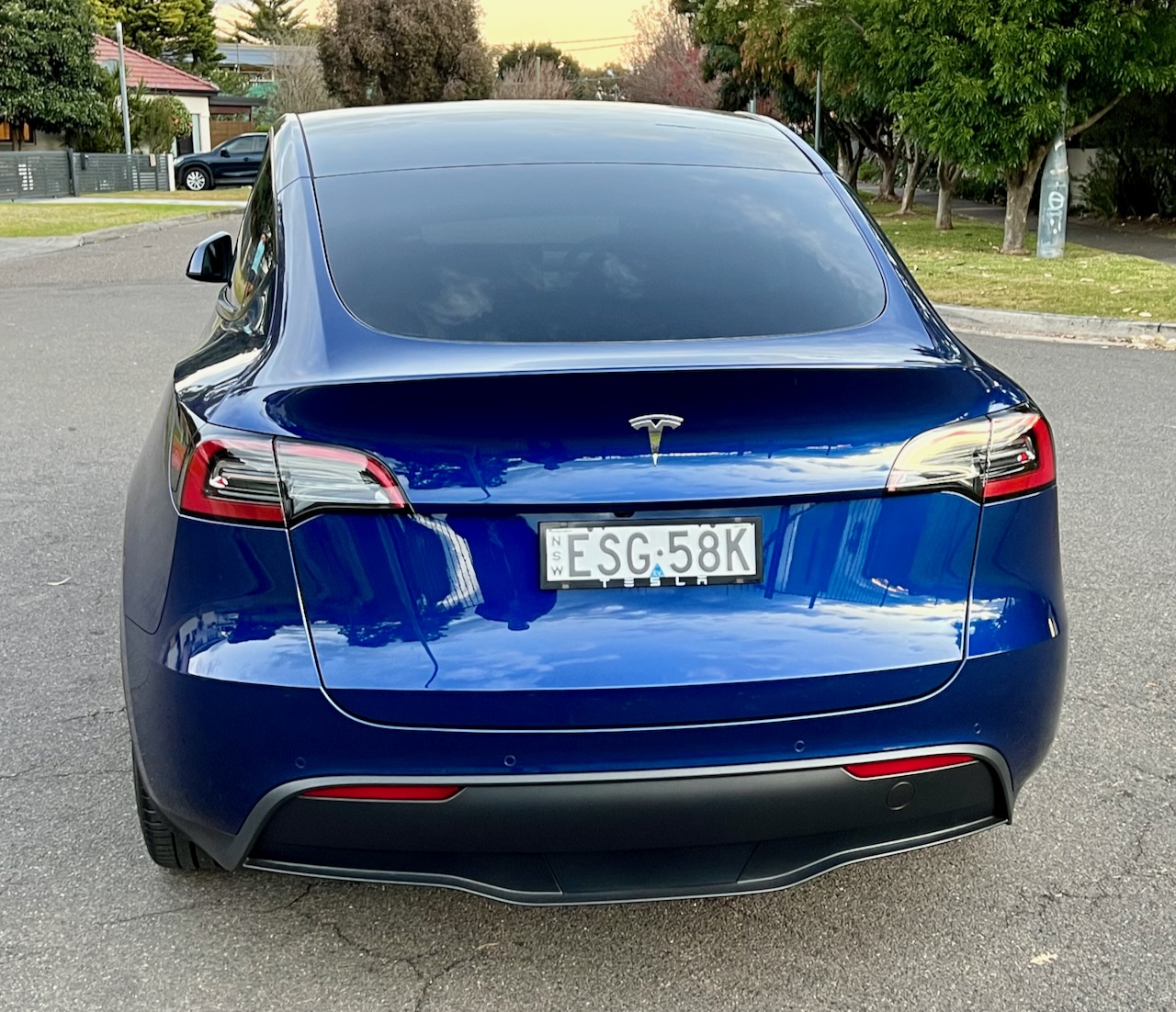 Model Y comes standard with 19-inch Gemini wheels, but you can pay an extra $2,900 for the 20-inch Induction wheels which we had on our Model Y RWD.

The first thing that catches your eye inside the car is the 15-inch touch screen located in the middle of the dashboard.

And there’s not much else.

This Spartan look is the same for the Model 3. Even in front of the driver, there is no gauges or display. The benefit of this is seeing more of the road. 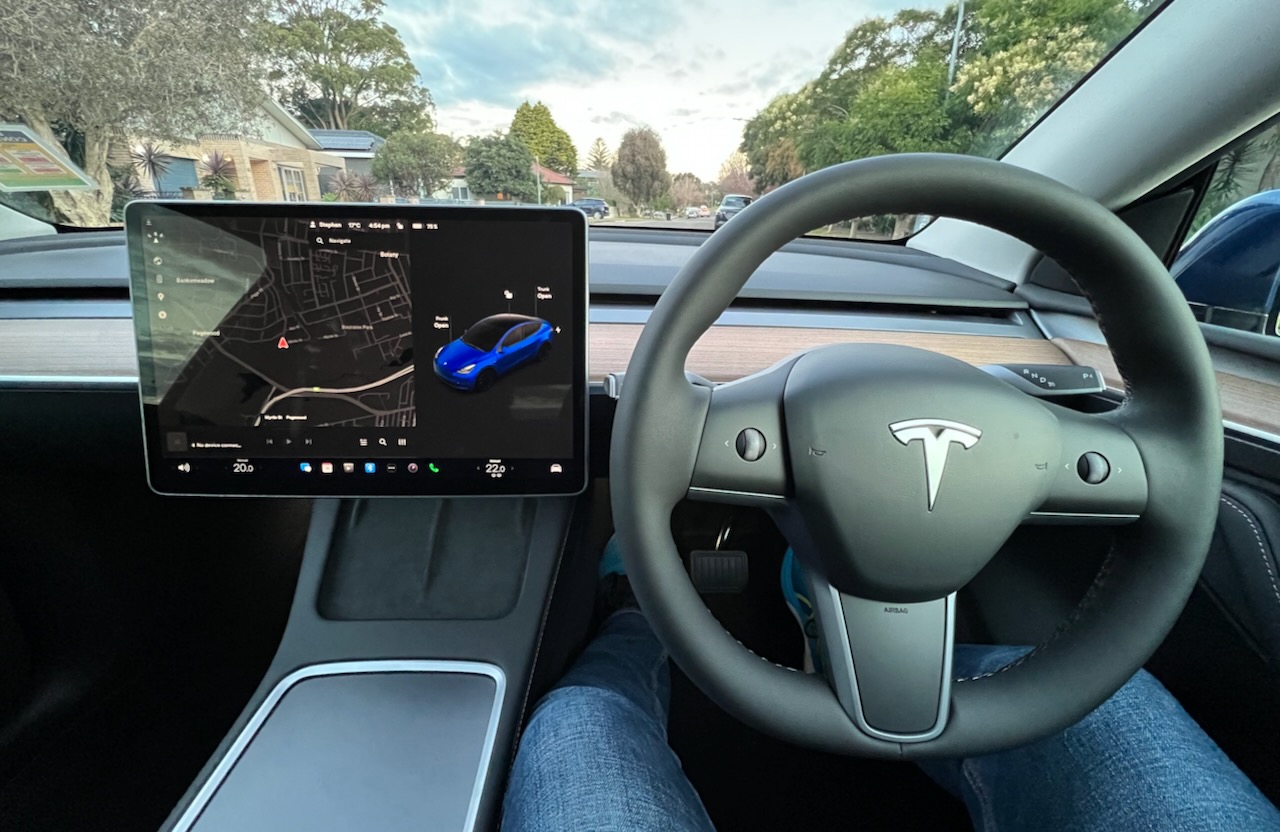 That central display controls everything.

It’s also your map, your connection and your entertainment.

In fact, you’ll be wondering how you could have driven the car without it once you get behind the wheel of the Model Y.

The car offers a spacious interior. It’s slightly roomier than the Model 3 and can comfortably seat five adults.

One thing we noticed was our seating position was a lot higher than what we’ve seen with our Model S and the Model 3.

This means you get better visibility if you’re the driver as well as a great view from every seat if you’re a passenger thanks to the panoramic glass sunroof which allows you to enjoy the view. 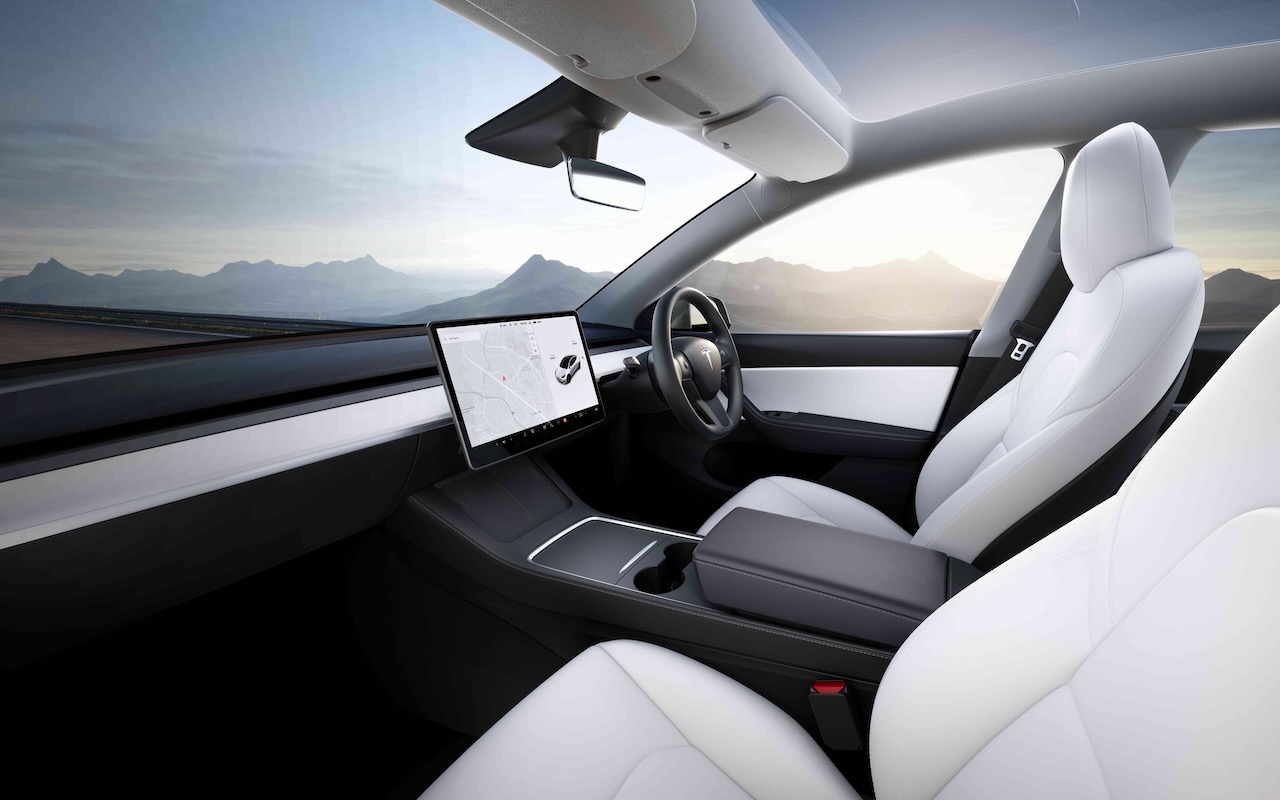 Now you can’t open that sunroof, but it does achieve its objective of letting more light into the car.

There’s also plenty of headroom and we found plenty of space above our heads.

This added space also makes it easier to get in and out of the car – that’s a different story with the Model 3 and the Model S which are designed to be sportier and lower to the ground.

Another surprise for new Tesla customers is the amount of storage space on board between the front trunk and the rear areas which benefit from the fact of not having an engine, a spare tyre or a fuel tank. It simply adds up to even more space. 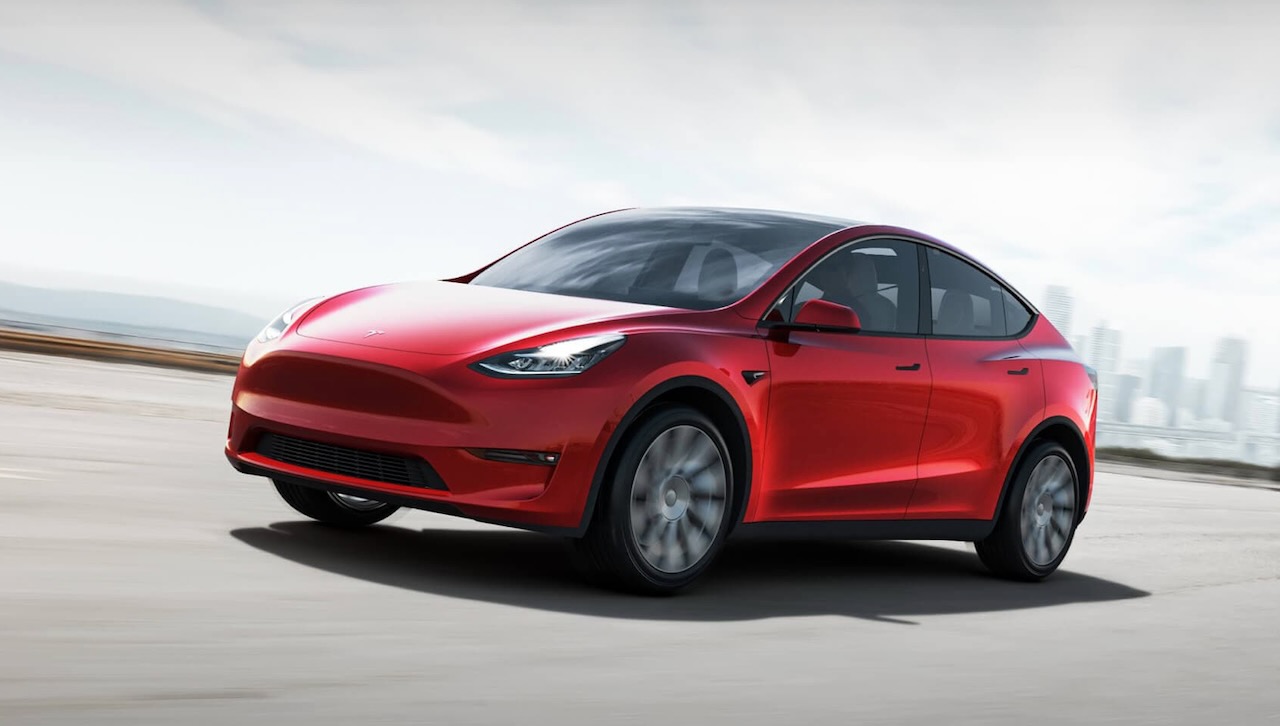 The Tesla Model Y RWD was initially priced from $68,900 but it went up a few days later after a global Tesla price rise to $72,300 plus on road costs.

The Tesla Model 3 is already one of the most popular EVs in Australia by a mile and the Model Y will be following that trend with huge early sales.

Initial orders will be arriving from August in Australia but if you order now, you’re looking at a February 2023 delivery at the earliest.

If you’re thinking of buying your first electric vehicle – the Tesla Model Y is a worthy choice.

Fishbone Diagram – The One Solution To Your Business Issues

Customers can now connect to Optus MVNO plans with an eSIM