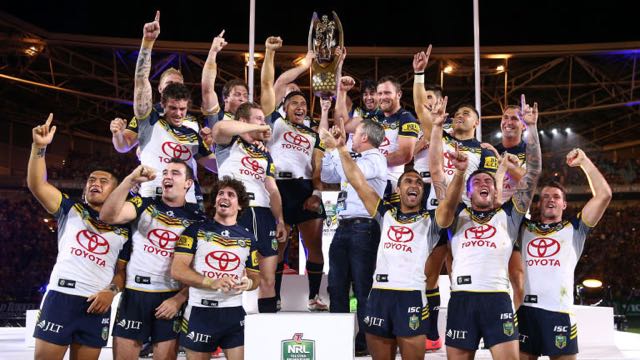 When it comes to pure sporting theatre and spectacle it doesn’t get much better than the North Queensland Cowboys’ fairy tale, last gasp, come-from-behind, miracle win over the Brisbane Broncos.

Fans are hailing it as the greatest grand final ever and also one of the most memorable sporting moments at ANZ Stadium – a venue that’s hosted the Olympics and countless memorable matches.

Last night, the Cowboys scored a try as the final siren sounded to lock up the match 16-all before inspirational captain Johnathan Thurston hit the upright with his conversion attempt and forced the match into golden point extra time.

Off the kick off Broncos halfback Ben Hunt knocked the ball on and from the ensuing scrum Thurston slotted the match-winning and premiership winning field goal.

After being bundled out of the three previous final series in controversial circumstances, the Cowboys had the sporting gods on their side this time around.
As amazing sporting moments go at ANZ Stadium, last night’s Cowboys’ first ever NRL premiership would have to rank pretty high.

But how does it compare against other sporting highlights at the Olympic Stadium.

Here’s a look at some of those other amazing moments:

In front of 108,000 screaming fans, Melbourne Storm stage a stunning comeback after trailing 14-0 at halftime and seal their first NRL title after Bill Harrigan awards a penalty try after a late high tackle on Storm winger Craig Smith.

The opening ceremony was a tribute to our culture, lifestyle and sporting tradition that culminated with Cathy Freeman igniting the Olympic cauldron that rose up around her from a pool of water before ascending to take its place at the top of the stand.

With a nation behind behind her and an incredible amount of expectation on her slender shoulders, Cathy Freeman etched her name in the history books with the 400m Gold Medal at the Sydney Olympics.

England’s Jonny Wilkinson breaks a 17-all deadlock against Australia in the Rugby World Cup final with a field goal with just 30 seconds left on the clock.

SOCCEROOS QUALIFY FOR THE WORLD CUP – 2005

After 120 minutes of football, the Socceroos were forced into a penalty shoot out to win a World Cup berth. Goalkeeper Mark Schwarzer makes two saves before John Aloisi sends his kick into the back of the net to seal a ticket to Germany.

South Sydney broke their premiership drought after defeating Canterbury 30-6 to seal its Premiership Number 21 and end 43 years of heartache for long-suffering fans that included being kicked out of the NRL competition in 1999 and being reinstated in 2002.

What do you think? Did we leave any other major ANZ Stadium moments out?