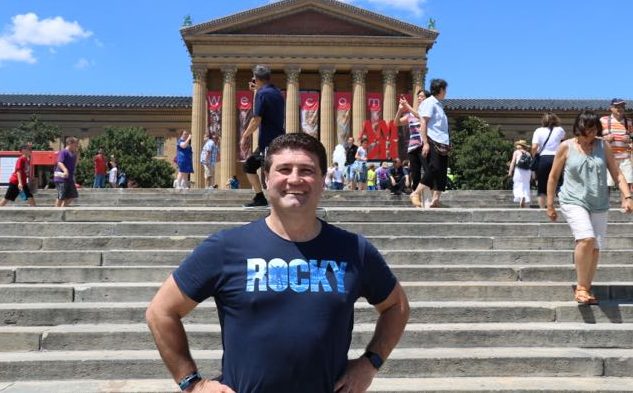 There are not many 40-year-old films that have lasted the test of time and still have a huge fan-base all these years later. The original Rocky film – the winner of the 1976 Oscar for Best Picture – is one of those films.

This is a tale of a down-on-his-luck boxer whose million to one shot at the title made him prove to himself that he was one in a million.

The story behind how the film was written and made reflects the onscreen character’s struggle.

Sylvester Stallone was down to his last dollar and wrote the original Rocky script in three days after seeing Chuck Wepner go the distance with Muhammad Ali.

He was offered a poverty-ending amount of money for the script but he risked all of that and insisted he wanted to star in the film. 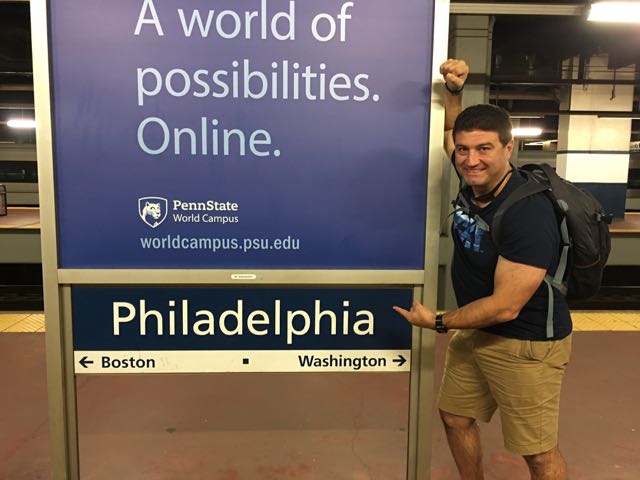 The studio took a chance on this unknown and the rest is history.

I can remember quite clearly the day I watched Rocky in the cinema when I was eight years old and have been captivated by the character and his struggle ever since.

What appealed to me about the Rocky films was the belief that Rocky had in himself that no one else had. The struggle against the odds to prove he was a champion.

His sheer will to go that extra round when he didn’t think he could.

I’ve watched all of the films so many times I can recite the lines.

But this week I got the chance to see where it all took place – where the magic was captured on film at the major locations in Philadelphia.

I was already in New York and, with Philly just a short 85-minute train ride away, I thought this was a place I had to see for myself.

After a quick Google search for “Rocky Tours” one of the top hits was the Yo Philly! Rocky Film Tour hosted by Mike Kunda – who won a national Rocky/Sylvester Stallone look-a-like contest.

I booked it on the spot and it was one of the best decisions I’ve ever made.

Mike answered my email enquiries promptly and I organised to take the tour with my brother Michael who is as big a fan of Rocky as I am.

Mike Kunda is as much a highlight of the tour as the sites you visit.

Apart from his remarkable resemblance to the Italian Stallion, Mike also has all of Rocky’s mannerisms down and even sounds like him.

It was as close as we were going to get to hanging out with Rocky himself.

Mike picked us up from the 30th St Station in Philadelphia in his black van which had his Yo Philly! Rocky Film Tour logo on the back windows.

And the tour started before we got to the van.

Here are places we visited on the Yo Philly! Rocky Film Tour.

In Rocky Balboa, Rocky surprises his son Robert when he arrives in his office lobby. That lobby is actually one of the entrances into the Philadelphia 30th Station. You can recognise the revolving door, the escalator and the columns.

The gym where Adonis Creed comes to train under Rocky’s guidance is a real gym and is seen many times throughout the film.

Rocky’s apartment is seen a few times in the original film, when he invites Adrian to come inside after their date at the ice rink, when Mickey leaves when he asks to be Rocky’s manager and when he leaves for his early morning run.

The apartment, in a Philadelphia suburb called Kensington, has hardly changed. It still has the same 1818 street number and same four steps and railing.

And the rest of the houses in the street have hardly changed either but the street seemed a lot wider in the movie.

Remember little Marie, (the girl whose response to Rocky’s sage advice was “screw you creepo) she was back in Rocky Balboa and her house is located in Kensington near a dead end street.

When Rocky asks her to come and work for him you can also see some familiar structures which can be seen from across the road from the house.

This is the hill where local gangster Mr Gazzo lets Rocky out of his car and gets out to ask him why he didn’t break the thumbs of a man behind on his payments.

As Gazzo is talking to Rocky you can see the bridge over their shoulder. As Gazzo leaves, Rocky walks up this hill after screaming to Gazzo’s driver – “I should have broken your thumbs”.

Mighty Mick’s Gym is seen several times through the Rocky series but most appearances are in Rocky, Rocky II and Rocky V. Rocky is seen entering the gym in Rocky and he is also seen looking up to the building in Rocky V and asking “how you doin’ Mick”.

The building is now abandoned and local developers may redevelop it into apartments.

The shop has two windows with the door in the middle and Rocky can be seen walking past it in the original film and visiting it to try and convince Adrian to go out with him. The shop is also seen in Rocky II where Adrian is working while pregnant and also in Rocky V. Today the store – which actually was a pet shop – is now abandoned.

Part of the training montage in Rocky sees him running along tracks towards a brick building. The tracks are long gone but you can see the red brick building and that distinctive brick work at the corner and the lamp post.

Rocky ran through these Italian markets in the first and second films. Today the markets are a lot more diverse with shop keepers of many different nationalities setting up stalls there. 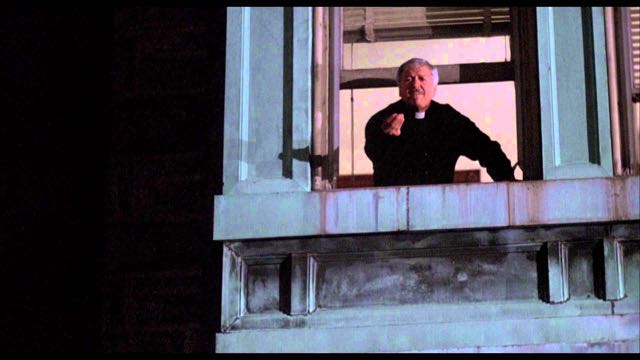 Before the Rocky II title fight, Rocky drives in to the carpark behind the church and asks Father Carmine for a blessing in case he gets beaten up.

The car park and window where Father Carmine appears has not changed a bit. It is actually part of the St Thomas Aquinas Church in Philadelphia.

Using his title shot winnings, Rocky moves into a new house with the number 2313. In the movie Rocky says the numbers almost add up to 9 which is a good omen.

In the film it can be seen when they inspect and buy the house, when Rocky jumps the railing to start his run and when he speeds off in his Trans Am for his title fight.

The home owner is not co-operative with tour operators so we had to just drive past slowly to see it rather than getting out of the van.

The Atomic Hoagie Shop where Rocky sees his friend’s little sister hanging out in the original film is now an apartment. But the parking lot they walk through is still there as is the house where Marie goes home before sending Rocky off with the line: “screw you, creepo”.

Our tour guide Mike Kunda was actually on the set to watch the filming and also got a chance to meet Sylvester Stallone.

WHERE ROCKY TALKS TO HIS SON (ROCKY BALBOA)

When Rocky’s son comes to see him at Adrian’s they walk down the street to a small intersection just outside the Victor Café restaurant location. It is here where Rocky delivers the famous line: “It ain’t about how hard you hit, it’s about how hard you can get hit and keep moving forward”.

WHERE ROCKY BOUGHT HIS TRANS AM (ROCKY II)

Rocky’s spending spree after his initial title shot with Apollo Creed began with the purchase of a Trans Am. This was filmed at an actual car dealership but today that building is now a Starbucks.

Rocky continues on his spending spree to buy himself a black jacket with a Tiger on the back and a fur coat for Adrian from a Bonwit Teller department store. Today that store is a Nordstrom Rack.

In the opening credits of Rocky II, which picks up right after the title fight in Rocky, an ambulance is seen weaving in and out of traffic on its way to the hospital. The ambulance pulls up at emergency room entrance the main Philadelphia hospital. 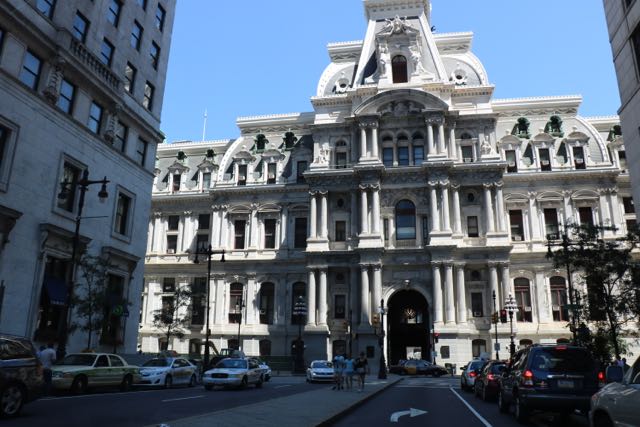 In the first Rocky film he wakes up at 4am, Rocky consumes the raw eggs and goes for a run through the main street of Philadelphia towards Philadelphia Town Hall and then to his first run up the steps of the Museum of Art.

One of Rocky’s training montage runs took him along the Schuylkill River and you can see him coming around a large rocky outcrop with the Strawberry Mansion Bridge behind him.

The scenes where Rocky visits the graves of Adrian and Paulie were filmed inside Laurel Hill Cemetery. There were gravestones made for Adrian in Rocky Balboa and later for Paulie for Creed.

They were placed in a picturesque part of the cemetery that looks down a hill and on to the river. The tree where Rocky stores his fold-out chair is no longer there – it was destroyed in a storm but you can still see where it used to be.

The gravestone for Adrian Balboa can still be found inside the cemetery on a side road between two trees.

The Rocky statue was created by Thomas Schomberg and unveiled for the first time in Rocky III as a tribute from the city.

It was eventually returned to the Museum of Art and positioned on a grassy knoll adjacent to the base of the steps. There was a long line of people who were waiting to take their photo next to the Rocky statue.

A short distance down the road is a statue of Abraham Lincoln. There wasn’t a single person there. 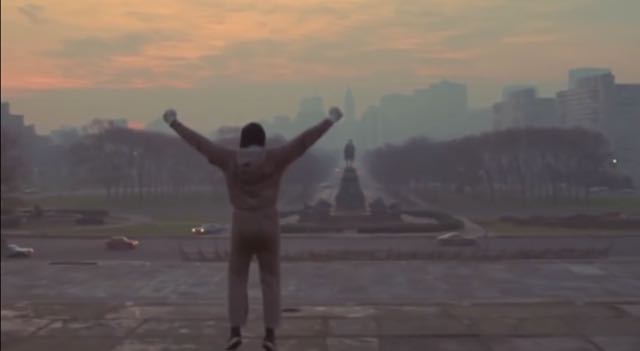 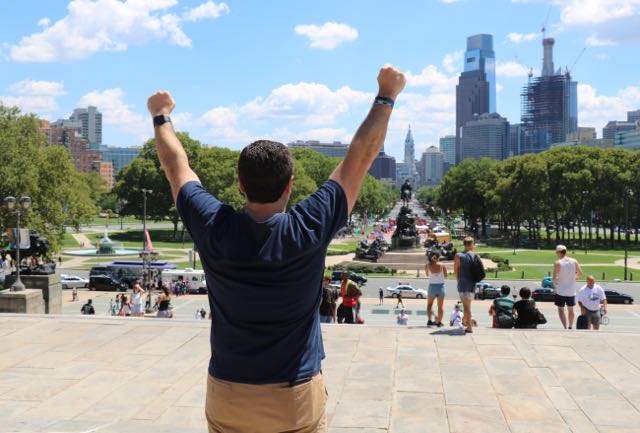 The Philadelphia Museum of Art has been immortalised not only by the valuable works of Art inside but by the 72 steps that lead up to it. The steps were a test of Rocky’s endurance and to prove to himself that he wasn’t just another bum from the neighborhood.

He scaled the steps twice in Rocky – the first time he barely made it to the top. But in the second attempt he flies all the way to the top before raising his arms in triumph. 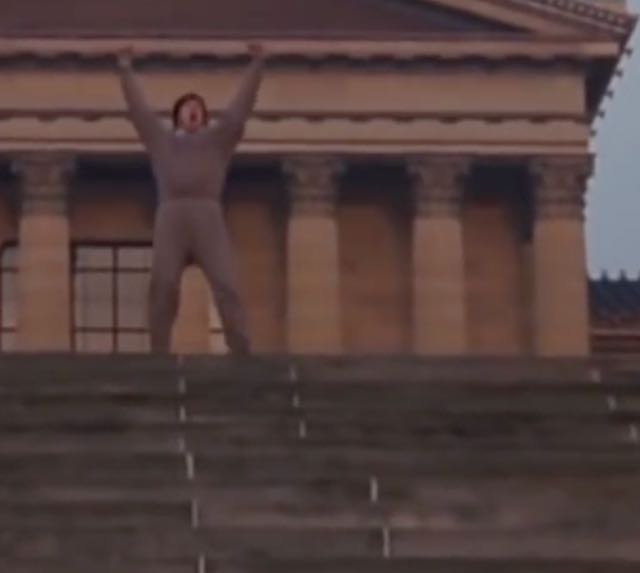 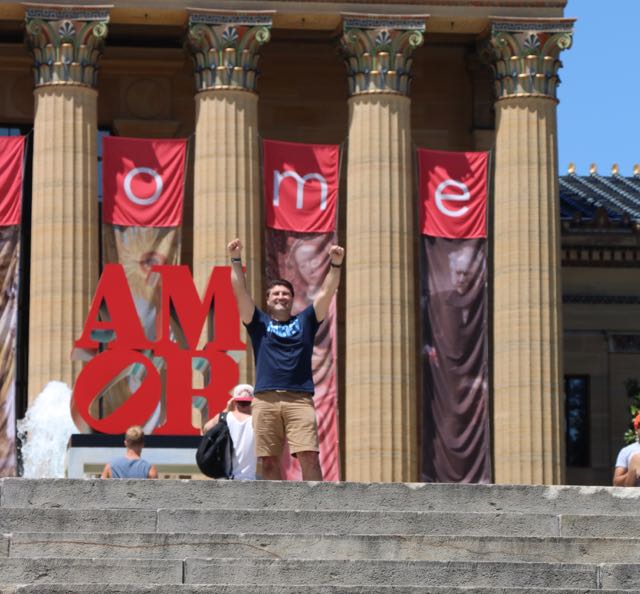 Today, 40 years later, thousands of people still run up the stairs everyday and raise their arms at the top just like the Italian Stallion.

If you’re a fan of the Rocky films then you simply must get yourself to Philadelphia and take the Yo Philly! Rocky Film Tour. 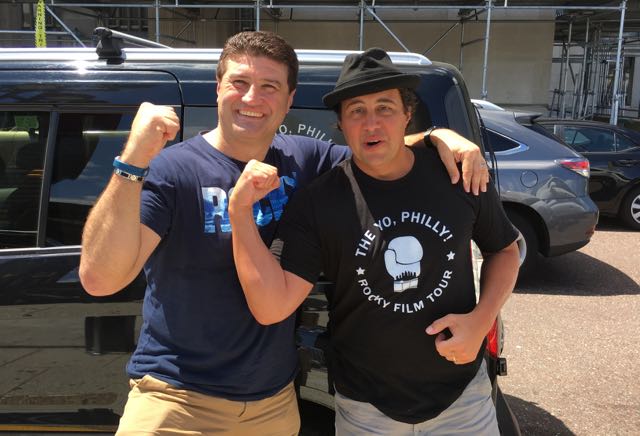 You will remember it for the rest of your life.

Power Jump 7.5 battery can charge all your mobile devices and jump start your car