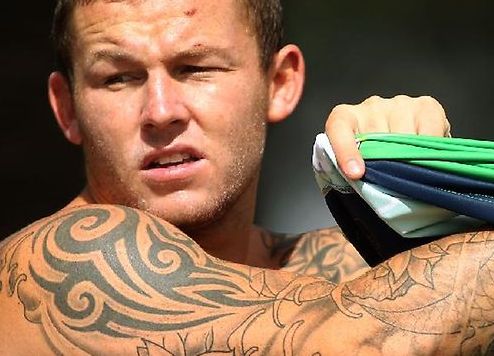 The Todd Carney scandal is the latest example of how a player’s management off the field and on social media is as important as what they do on the field.

The Sharks five-eighth was photographed urinating in his own mouth – a practice known as “bubbling” – and that image then went turbo viral once it hit social media.

This despicable act and the way it has spread like wildfire across social media just further illustrates a 21st century athlete has a lot more to manage than how they perform on the field, on the court, on the pitch or in the pool.

Social media has become a tool for professional athletes to increase their reach and their fame and allows them to interact with their fans and followers.

If used the right way it makes their brand even more powerful and makes that person a more valuable commodity when it comes to sponsors and other endorsements.

But, as we have seen with Todd Carney and with many other sports stars and celebrities, it can also be the tool of their demise.

This dual edged sword we call social media can be friend and foe – especially for stars like Carney who are in the public eye.

And there’s no point blaming social media or the regular media for this drama. It’s like the old saying – guns don’t kill people, people kill people.

In the case of social media a good rule of thumb for celebrities – and anyone else for that matter – is don’t share anything on social media that you wouldn’t like to see on the front page of the newspaper or leading the 6 o’clock news.

Many are siding with Carney and saying it was unfair for the Cronulla Sharks to sack him for an act of stupidity that didn’t harm anyone else but himself.

As a former professional rugby league player myself I can remember a clause in my contract, and in the contract of any other player to this day, was that you could not bring the game into disrepute.

In a time when the NRL is fighting against other sports like soccer and AFL for crowds, media attention and sponsorship, the Carney incident is a hopeless own goal that will drive potential sponsors and fans to those other codes.

One difference between when I was playing to the modern game is the existence of social media and smartphones carried around by just about everyone that can turn them all into journalists.

How many times have we seen on social media the slightly blurred images and shaky videos of people in the public eye captured in the middle of a meltdown or incident by a person on the street with an iPhone.

This content is pure gold for media outlets and just shows that the person in the street is helping newspapers, TV and radio stations do their job.

Now that’s not to say that there were never incidents in the past. Of course there were – but the smartphone was still 20 years from being invented.

Back in the day, a player would have to get caught red-handed by the media to generate the scandal level that Carney has created all by himself and with the help of the fast fingers of that so-called friend who shared that picture online.

Another reaction supporting Carney is that if he was a bricklayer and did the same thing he’d still have the job.

That’s probably right – but Carney is not a bricklayer.

He’s a role model for young kids – a popular and highly visible individual who has the skills many a player would die to possess.

He put pen to paper on a reported $650,000 a year contract that included that ever-present clause of not tarnishing the game of rugby league.

Carney has literally pissed all over it. He has always been a problem child with a long list of incidents in the past but this was the last straw.

You can’t accept the accolades – and the money – without doing your share and conducting yourself in a respectable manner.

Any young player coming up in the ranks in rugby league have the opportunity to create an amazing career earning hundreds of thousands of dollars and being idolised by fans by playing a sport they would have played for nothing anyway.

These same younger players are no doubt a lot more social media savvy and are probably at an age where they have not known life without the internet and social media.

Part of a club’s duty of care to that player, apart from developing their on-field abilities, should be to teach them that it’s how they conduct themselves off the field that will set them apart.

The hard lesson here for Todd Carney and the example for other aspiring sports men and women – social media is a like a flame that has the power to illuminate the brightest star or burn your house to the ground.