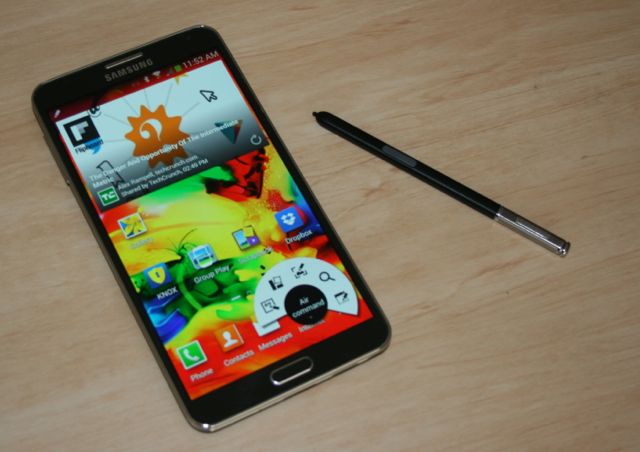 Samsung and Apple are fierce competitors but have a different approach when it comes to major product releases as one Tech Guide reader discovered.

One of our readers, who asked to remain anonymous, contacted Tech Guide after an interesting visit to the Samsung Experience Store in George Street in Sydney.

The reader, we’ll call him Rusty for the purposes of this blog, was excited to receive his Samsung Galaxy Note 3 today which he had pre-ordered through Virgin Mobile.

Naturally he wanted to buy a case and a screen protector to protect his “investment”.

Rusty told me he is a “massive Samsung fan” and he said he also owns a Samsung tablet along with a Samsung TV.

He went into the Samsung Experience Store ready to spend his money on a case or cases and that screen protector.

When he walked in he said a female store worker looked him up and down with a stern look on her face.

“It wasn’t exactly a welcoming look,” Rusty said. “She was a bit surly.”

But things got even more interesting when he showed her his new prized possession – his black Samsung Galaxy Note 3.

“Where did you get that from?” she asked before adding: “I thought it wasn’t due to come out till next week.”

Rusty explained his pre-order from Virgin Mobile was delivered that day and asked if they had any of the Samsung-made cases or flip covers for it.

Rusty said she told him they usually get cases “a couple of weeks” after the phone comes out.

“But this is the Samsung store,” Rusty said. “Don’t you know when your own phone comes out?”

When it comes to customer service, Apple Store staff are painfully polite and greet customers at the door with a smile.

There has been many a leaked document from the Apple Store staff handbook that has revealed Apple’s precise policy when it comes to customer service.

They’re not allowed to point or use negative words. They are trained to make the customer feel special, empowered, enriched and excited about Apple’s products.

That, combined with the fact that Apple makes excellent products and offer an excellent in-store experience, is the reason why Apple Stores make a lot more money per square metre than a Mercedes Benz dealership

Samsung actually sells more smartphones than Apple by nearly three to one yet still have TV ads that show groups of people making the single iPhone user feel like the outsider.

“It’s time to change, lose that “junior burger” phone and supersize to a GS4,” the actor in the latest Samsung commercial says about the iPhone.

But you’d think that a company like Samsung with a 30 per cent worldwide smartphone market share against Apple’s 13 per cent, would not have to poke Apple in the eye in its ads..

Apple’s marketing focuses solely on its own products and features.

Which takes us back to Rusty’s experience in the Samsung Experience Store.

And let’s get one thing straight, Rusty is a huge Samsung fan – he loves their products – as do countless thousands of other customers.

I’m also a fan of Samsung’s products – you can take a look at the many reviews of their devices I’ve written over the years on Tech Guide.

With the Galaxy Note 3 – which I reviewed this week and gave 4.5 stars out of 5 – Samsung was entitled to put on a song and dance about its release.

If you asked a customer what date the Galaxy Note 3 is coming out you’d be answered with a shrug of the shoulders.

The woman that works in the Samsung flagship store didn’t even know.

And that’s yet another point of difference with Apple.

When it unveiled the new iPhone 5S and iPhone 5C at a special media event – it not only gave a firm release date it also gave a time when they would go on sale.

That certainty is one of the reasons why there are lines outside Apple Stores for their product releases.

The Apple Stores themselves are perfect distribution machines for their products, especially on launch days and a natural place for fans of the brand to gather.

Samsung is rolling out more stores – the Sydney store opened last year and a Melbourne store opened earlier this year with plans for even more.

Despite Rusty’s surly reception today, Samsung Experience Stores are a great place to touch and use Samsung products and to see how they can all link together and talk to each other.

Samsung is riding quite a wave at the moment with hit product after hit product.

This year alone the Galaxy S4 smartphone, the Galaxy Tab 3 range and, more recently, the Galaxy Note 3 have been greeted with rave reviews and solid sales.

Samsung has every right to argue that don’t have to change a thing and they’re probably right.

But if they were able to give offer more certainty about their key product releases – there would be long lines outside its stores as well.