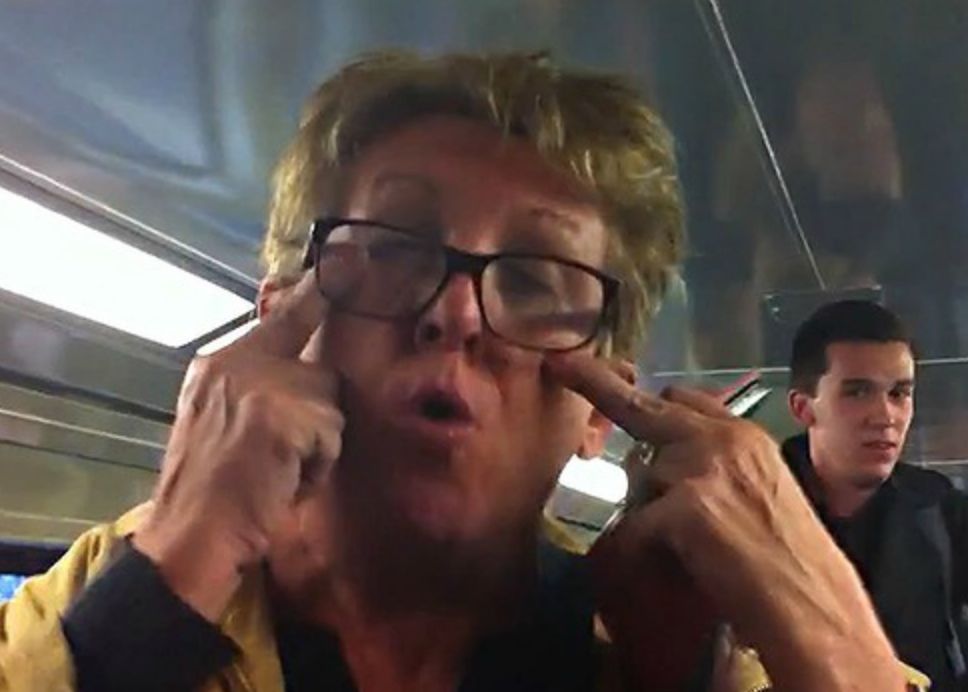 One week it was a high-profile footballer and the next week it was a woman’s racist rant on a train and both were captured and shared using a smartphone.

It has become glaringly obvious that there is nowhere to hide in public for anyone who has a brain snap.

So if you’re thinking of unloading on a fellow passenger or decide to act inappropriately or disrespectfully, there is a very good chance you will be seen and recorded and shared and embarrassed.

The disgraceful racist rant from 55-year old Karen Bailey (she even gave a false name at first) on a packed Sydney train is just the latest example of appalling behaviour being captured by people with smartphones.

That incident, which resulted in Bailey being charged by police with offensive behaviour, was filmed from at least two angles by the other passengers. The main video has been viewed more than 500,000 times on YouTube.

George Orwell’s famous novel 1984 told of a society where Big Brother was always watching (yes kids that’s where the term came from – not the reality show) and our every movement was monitored.

Today’s citizens, armed with their mobile devices, have become the Big Brothers – and Big Sisters – who can easily capture anyone else who decides to step out of line.

In this instance, this use of the technology has empowered people to call out people for who they are.

Bailey’s shameful racist rant against an Asian woman was exposed on local and international media.

Unfortunately, it solidified the impression some people have that Australians are being a bunch of rednecks that hate people that don’t look or act like us.

Thanks a lot Karen Bailey. Way to make a good impression.

But at the other extreme, the technology has been used to record pranks and fights that were organised to be captured and shared as a way of saying “look at what I did”.

How many morons have shared videos on YouTube endangering themselves and other doing stupid things. Unfortunately it’s not against the law to be an idiot.

Or what about the schoolkids who stand around watching their school mates in a fight beating the crap out of each other and recording it on their phones instead of stepping in to break it up.

The bottom line is that there will always be someone who can whip out their smartphones and start shooting video in seconds if you decide to ignore other people’s rights and courtesies and start acting like a goose.

Like Karen Bailey, you will be exposed as a fool.

Breakthrough can make devices run for weeks on a single charge