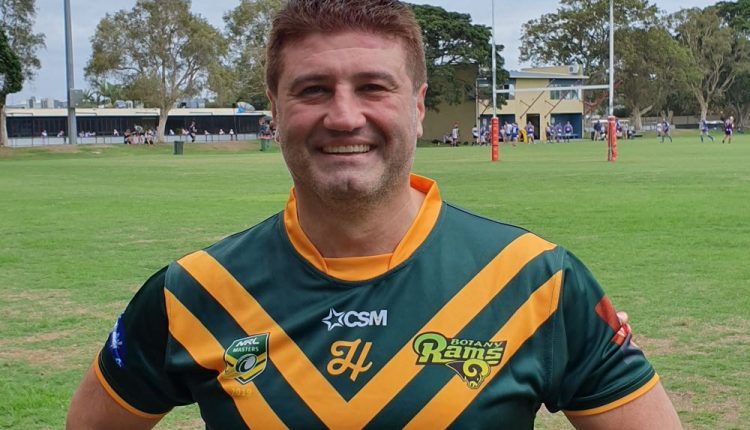 My love of rugby league is pretty obvious. So is the pride I have that I’ve played the game at the professional level with the mighty South Sydney Rabbitohs. So the opportunity to lace on the boots again in the NRL Masters was one I pounced on.

I saw it as a bit of a challenge to get out of my comfort zone and see if I could still play and compete like I did back in the day.

There’s a few more miles on the clock since the last time I played. At the age of 51, the body wasn’t as shredded as it was when I was 20.

I’m not going to lie, I was a little anxious (although not as anxious as my wife) about getting injured and whether my current fitness level was up to the task.

I felt like Rocky in the film “Rocky Balboa” who wanted to climb in the ring one last time to prove that he can.

This was no title fight for me but, like Rocky, there was still “some stuff in the basement” that I wanted to see if it could still stand up against other players in the NRL Masters.

The NRL Masters – open to players 35 and over – has modified rules and safeguards.

We were “getting the band back together” with my junior club – the Botany Rams – my South Sydney junior league team I started playing with when I was five years old.

I would go on to play 11 seasons with the mighty Rams which included seven premierships and two seasons when we were undefeated.

The friends I have made playing with and against over the years are still my friends to this day and the NRL Masters presented an opportunity to play with some of these guys yet again.

And here we were again – the three of us playing for Botany Rams together 46 years after we laced on our boots for the first time together.

It was an amazing feeling being back together in the colours of our junior team after all these years.

The NRL Masters is open to teams across Australia and the rules of the game are modified to cater for the older players with a limit of two players to a tackle and short 15-minute halves.

There was also the option for players to wear red shorts (50 and over) and gold shorts (60 and over).

If you’re wearing your club’s regular shorts then players are allowed to tackle you and you can tackle them.

In the red shorts, players can only be grabbed in a tackle and they can also make a two handed touch to stop their opponents.

In the gold shorts, players could only be touched and in defence they only needed to touch other players.

There were 108 teams that entered the tournament which was played at the Runaway Bay Sports Complex on the Gold Coast.

The Botany Rams had a squad of about 20 players – all blokes I knew really well and had been friends with for decades.

Just being with these guys on a footy trip was like a step back in time.

The Botany Rams clubs always had a lot of spirit and a remarkable level of camaraderie and those same feelings kicked in again instantly when we were together again on the Gold Coast to contest the NRL Masters.

The tournament was a not a competition – in other words you didn’t win or lose matches and there were no semi-finals and finals.

This format was designed to prevent teams from getting too serious. We had five games and you could only play for pride. 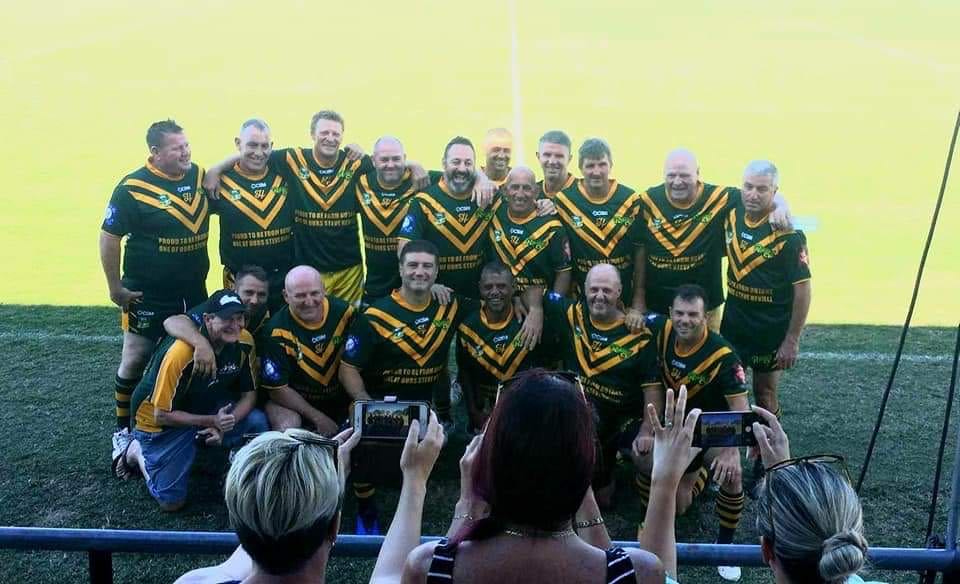 For me the biggest decision to make was whether to play in the Botany Rams green shorts and play full tackle or pull on the red shorts that players 50 years or older have the option of wearing.

I was leaning towards the red shorts but decided to go for it in the green shorts to start with and see how it feels. I could always put the red shorts on later if it got too rough.

I’m happy to say I ended up playing all five of our games in the green shorts – they go better with our green jerseys that look like the Australian rugby league jersey anyway.

I was nervous before the first game – here I was again in my playing gear, wearing boots and wearing a mouthguard – the last time I did that the internet hadn’t been invented yet.

But incredibly, I snapped back into the mindset of playing like my last game for Souths was last week.

I was always methodical with my warm-up and stretching and that’s what helped me prepare myself.

All the other players – my teammates and opponents – were in the same boat and there was no shortage of quips about how we were “too old for this”.

But against players slightly younger, the same age, slightly older and much older I thought it was a pretty level playing field.

From the first game I discovered it was all played in the right spirit.

If you wanted to charge up hard with the ball you’re going to get tackled with the same level of energy.

We found a satisfying middle ground that challenged us but that didn’t threaten to put us in hospital.

There were occasions where things got a little heated and we found it within us to stand up and meet the challenge.

One match in particular from the NRL Masters comes to mind.

We were up against a team that had made some serious preparations (we found this out after the match) and they had whittled their 80-strong squad down to their top 25 and had also been training for months.

For them it was go hard or go home.

Our Botany Rams team, while we had not trained together a single day before the tournament, had a star-studded side with numerous players who played in the NRL including Steve Mavin, Noel Goldthorpe, Darryl Neville, Graham Lyons and myself.

But we also had a bunch of blokes who weren’t going to let the person beside them down.

This team, through a combination of seriousness and the fact they were lining up against a number of former NRL players, really turned it on with hard runs and solid tackles.

Personally I copped a few heavy hits but also put my body in front of a few players and stopped them in their tracks.

With the ball we also played pretty well moving it out wide and also backing up through the middle. 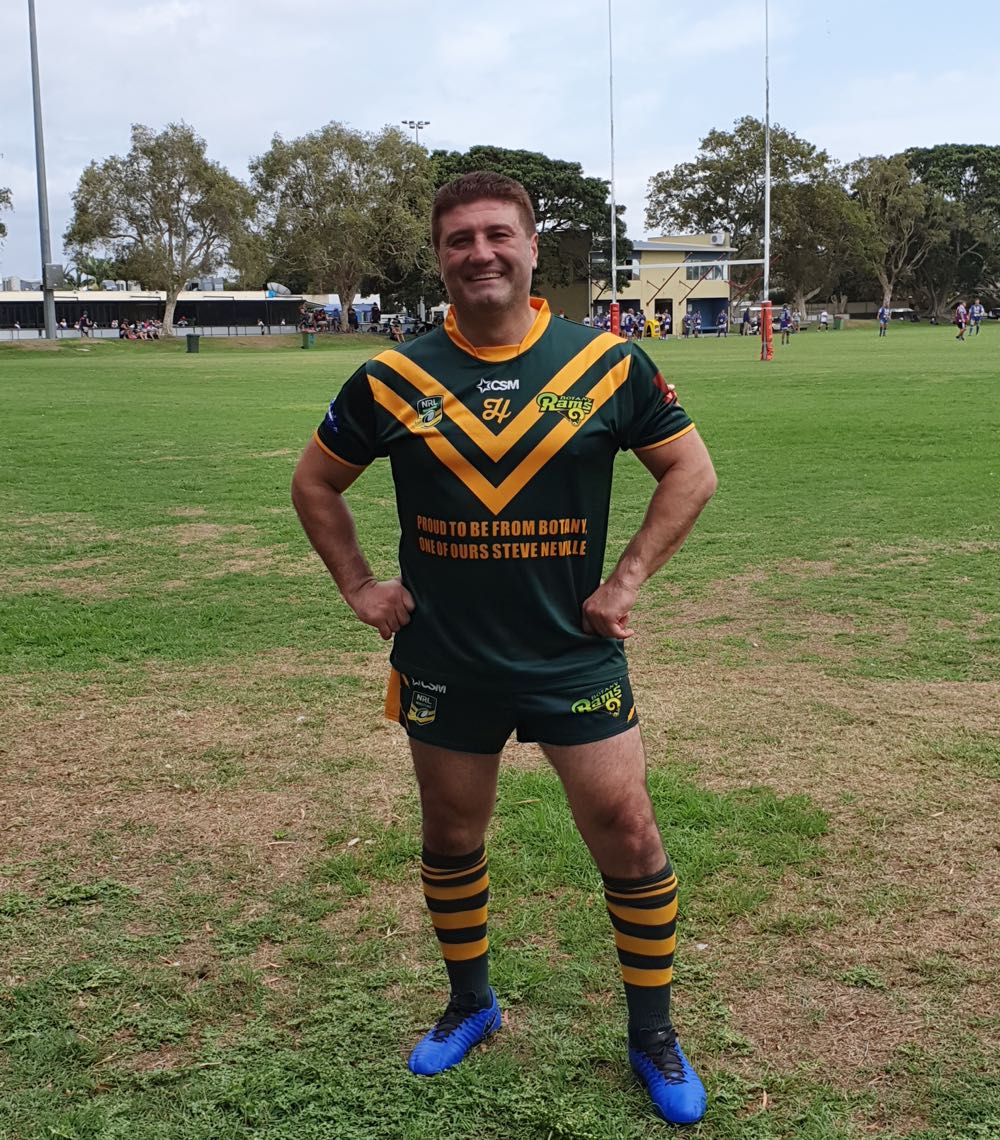 I played in my usual hooking position so I packed into every scrum, tried to give good service out of dummy half and also ran the ball like a forward.

My proudest moment was when I ran the ball from dummy half and sprinted past markers and into a yawning gap beside the ruck.

The tryline was 50m away and no-one was going to stop me – except the rules.

You can’t score from dummy half – I was told by my support runner Ronan Byrne so I offloaded and gave him the easiest try of his career.
But I told him that I still wanted to claim that try as my own.

We won that game, despite our opposition’s grumbles about a couple of referee decisions.

The Botany Rams had stood up when we needed to. And it was a moment of great pride for all of us.

The game meant nothing but in our hearts we had won our own mini grand final.

Speaking to my wife Jo on the phone after our last match, she could sense how much this tournament had meant to me.

“You sound like you’re 20 again,” she said. It felt like I was 20 again. It felt like an achievement to get through these games and play to the best of my ability.

And that’s exactly what we did and the feeling of satisfaction for me and my teammates was immense.

For the record not that anyone was keeping score, we won four out of five games – our only loss a narrow one in our first game which we had no idea what to expect being our first year in the NRL Masters.

Some teams had played as many as 13 times and that experience showed.

I can understand why they wanted to come back. It was a great experiences, a well-organised event that was played in the right spirit.

Every team we met was friendly and all there for the same reason – to have fun playing the game they love with their mates.

Rugby league is the greatest game of all – so you can’t blame us for wanting to keep playing.