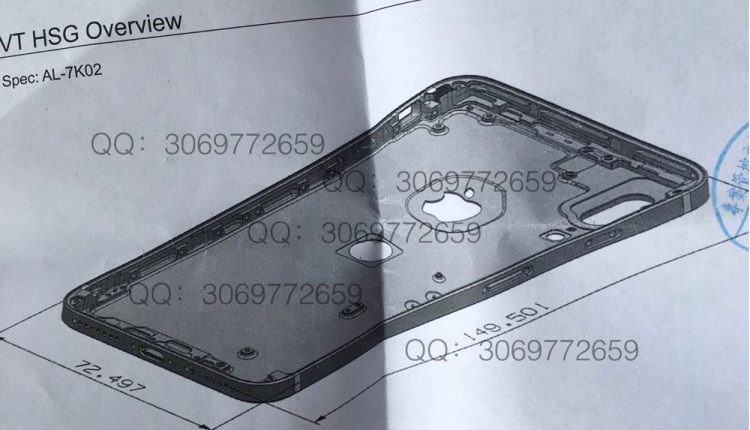 Could this be an image of Apple’s next iPhone

Apple’s next iPhone is one of the most eagerly awaited devices and a leaked design schematic has been uncovered reportedly reveals a number of new features and design changes.

Noted leaker Sonny Dickson, a reliable source of rumours in the past, tweeted the render of what appears to be the back shell of the iPhone 8.

It shows a vertical dual camera opening which would mean the lenses would sit top and bottom rather than side by side like they are with the iPhone 7 Plus.

Also shown on the render is a circular opening below the Apple logo.

This is believed to the relocated home button and Touch ID fingerprint reader which would have been moved to the back to make way for a screen that will take up almost the entire front face of the device.

Another theory behind this opening is a possible wireless charging sensor so the iPhone can be recharged without the need for a cable.

There are also some measurements that can been seen on the leaked design schematic – which we are assuming is for the larger iPhone Plus model – which would make the iPhone slightly shorter and narrower than the current iPhone 7 Plus.

iPhone 8 looks to be taking a new direction pic.twitter.com/mG19bcDYiC

That shape would suggest an 18:9 aspect ratio screen – similar to the Samsung Galaxy S8 so it could fit a larger screen into a smaller device.

Those measurements could also suggest the screen size might remain at 5.5-inches but within a product that’s between the current iPhone 7 and iPhone 7 Plus device sizes.

There has been no shortage of rumours for the next iPhone.

It’s the 10th anniversary of the of the iPhone this year and Apple will surely be planning something special.

The most popular rumours include a curved AMOLED screen, an all-glass design, wireless charging and facial recognition.

Apple will be holding its Worldwide Developers Conference in San Jose from June 5 and there’s a real possibility the new iPhone could be revealed there with a release in September.